From passion to action: We love CityU! 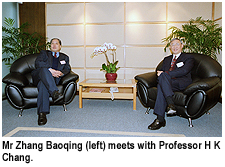 In line with the theme “We love CityU”, students, alumni and staff members told how their “love affairs” with CityU started and grew. Deeply touched by the passion and caring spirit demonstrated at the session, Dr Dennis Sun, CRC Chairman, pledged on the spot to donate HK$700,000 to support CityU’s internal fund-raising activities. His supportive and generous act received a big round of applause.

“CityU is part of our lives”

In his opening remarks, Professor H K Chang, University President, thanked Dr Sun for devising new ways to enhance interaction between the University and the community. “I like very much today’s theme – ‘We love CityU’ . That is such a fitting theme,” said Professor Chang. “I’m 100% sure everybody gathered here today loves CityU. We love our University not only because it is worth loving but because it is part of our lives and we want to make it better.”

Reflecting on the future of , Professor Chang said internationalization was very important. “All of us are trying very hard to attract students from diverse backgrounds in order to make our campus a more stimulating environment in which we learn and work,” he said. Professor Chang took the opportunity to proudly announce that more than 80% of CityU’s offers of undergraduate places to top students from the mainland had been accepted.

Sense of belonging and solidarity

In the past 20 years, CityU has developed from a polytechnic located in a commercial building to a full-fledged university with splendid achievements and growing recognition. The gathering featured a video show in which a dozen students, alumni, and past and present staff members shared the “blood, sweat and tears” and “thrills, joy and smiles” of their CityU experience. Their stories were different but they all depicted the life and dynamism of CityU.

The highlight of the evening was a discussion forum with six participants, comprising student, alumni and staff representatives. Professor Richard Ho, Dean of Undergraduate Education, who served as the forum moderator, invited participants to share how they had benefited from CityU and what expectations they had of CityU.

Ms Debby Lai, a PhD student in the Department of English and Communication, said the sincere invitation of one of

her teachers helped her decide to return to CityU for a research degree. “I treasure the warm atmosphere and friendly relationships here. At CityU, I got many chances to develop myself. For example, the Student Ambassador programme organized by Student Development Services (SDS) has helped me better understand myself and enhance my capabilities.”

Mr Patrick Lee, an alumnus and now a Senior Inspector of the Hong Kong Police Force, also felt grateful to the University. “I was deeply motivated by Outward Bound activities initiated by SDS, through which I learned a lot about interpersonal skills, which was very important to my career development,” he said. “Because I had gained so much from my alma mater, I want to contribute to its development by uniting more alumni to support and serve CityU,” said Mr Lee, who is also Chairman of the CityU Alumni Association. “The more I know about CityU, the more I want to get involved in its development.” Apart from his devotion to the Alumni Association, Mr Lee has shown his attachment to CityU by planning to return to the University to pursue further studies in September.

Chair Professor Pak L Chu joined CityU’s Department of Electronic Engineering four years ago. He treasured the opportunity he found to cooperate with a group of young and dynamic teaching staff. “Teachers of different ages and experience work together for the benefit of our students. This is a stimulating and rewarding experience,” he said. He was also thrilled by the freedom to do research and the advanced equipment and facilities provided by the University. He urged all members of the University to work together for a better future for CityU.

Another alumnus, Mr Simon Hui, is the Director of Business Development for EPSA Corp Ltd. He talked about how he managed to take classes at CityU’s previous location in Mongkok, run his own business and at the same time maintain a relationship with his girlfriend, who later became his wife. He stressed that a university must be able to produce graduates who can make a contribution to society. “I believe CityU is doing a good job in this respect, and I am also very willing to contribute whatever I can to help the University achieve this goal,” Mr Hui said.

When he first entered CityU two years ago, Mr Lawrence Yeung, now a Year 3 student in the Department of Public and Social Administration, admitted that he was at a loss, not knowing what he should do to make the best of his university life. “But after I had taken part in a Student Leadership Conference, I started to change,” Mr Yeung said. Through interacting with people from different backgrounds and participating in an exchange programme in , he broadened his horizons and became more active in learning new things. “Even my father, who used to wear a stern face, was amazed at how I had changed. From then on, he had great trust in me and my university education.”

Mr Yeung was grateful for the many opportunities CityU provided him to learn and grow. “I hope that more students can benefit like I did from similar opportunities,” he said.

Mrs Dorothy Davies, Associate Director of SDS, was among the first batch of staff members to join CityU in 1984. “It was such a great challenge working for CityU at that time because we had to start everything from scratch,” Mrs Davies said. Because of her great involvement in building up the University over the years, Mrs Davies has developed a deep love for CityU. “I’m so proud of CityU. This is a place to fulfil one’s aspirations. Here, I have made my dreams come true as our staff, students and alumni can now enjoy excellent sports facilities,” she said.

Echoing several earlier speakers, she hoped that more resources received from future donors would be devoted to student services. 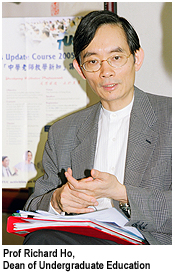 The sincere sharing and heartwarming stories of the speakers drew an enthusiastic response from the audience. Students, alumni and staff eagerly spoke up and expressed their love and dedication to CityU in their own ways. All of them said they were proud to be a member of CityU and that wherever they went, they would represent CityU. All were impressed by the unified spirit of the CityU community.

“CityU had to struggle to grow under less favourable conditions in the past,” Professor Ho said in concluding the forum. “But over the years, we have built up a strong network with industry and the community. Looking ahead, we expect further progress under the leadership of our supportive Council members.”

Sir Gordon Wu, Chairman of the University Council said, in his remarks to the gathering, he valued the opportunity to chat and interact with CityU students face-to-face. “A good university must emphasize nurturing the young minds who will care for and make contributions to society. CityU has excelled in this respect,” he said. He also said he was impressed by CityU’s Chinese civilization courses, which require all students to study and learn about Chinese history and culture.

Sir Gordon noted that the University now needed to gear itself up for the four-year curriculum and to solve its space shortage issue so as to provide students, staff and alumni with better facilities to communicate and interact. He said CityU had an excellent location, a good reputation, good programmes and dedicated staff. As Council Chairman, he was committed to devoting his best efforts to providing better facilities for the students, staff and alumni of the University.

In addition to promoting communication within the University, the CRC seeks to promote a positive image of the University in the community. It also undertakes fundraising campaigns. Dr Sun explained in closing remarks to the gathering that the CRC planned to meet four times a year. In its first meeting, held in December 2004, it discussed the University’s image, positioning and branding. The second meeting, in March 2005, was a gathering at which more than 20 principals and career masters from local secondary schools met students and senior staff members of the University to gain a better understanding of the education philosophy and experience at CityU. At the next meeting, Dr Sun said the CRC planned to invite representatives from industry and the community, give them a better picture of the qualities of a CityU education, and solicit their support.

In later discussions initiated by Dr Sun, participants supported the suggestion that having a university anthem would help to unify the University community. The CRC will gather information and follow up on this idea.