Division of Language Studies (LS) has become the first officially approved education unit in Hong Kong to hold the Korean Language Proficiency Test (KLPT). The inaugural test will be held on 30 October.

This appointment to hold the KLPT demonstrates that 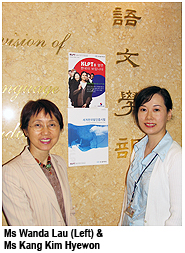 CityU is being recognized as a quality provider of Korean language education.

“We are very proud to become the first approved education unit in Hong Kong to hold the KLPT,” said Ms Kang Kim Hyewon, Deputy Programme Leader and Lecturer in the LS. “The Division takes an active role promoting the Korean Language and culture, not only to CityU students and staff, but also to all Hong Kong residents.” The appointment acknowledged the high quality of LS teachers and programmes, she said.

Ms Wanda Lau, Acting Head of LS, said the appointment was one of LS’s great achievements this year. “We look forward to offering preparatory courses for the KLPT next year and furthering ourselves as an international language proficiency test centre,” she said.

The KLPT consists of two levels: Basic and Advanced. Basic is for beginners who have spent around 100 to 200 hours learning Korean. The focus is on managing situations which require an elementary use of the language. Advanced is for intermediate and/or advanced learners who have studied Korean for a longer period. This level recognizes the ability to communicate in all circumstances, including those which require knowledge of the target culture. 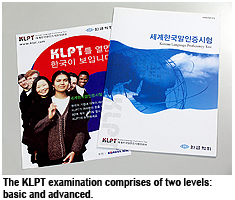 Registration for the KLPT is from 1 to 30 September and application forms can be obtained from LS, Community College of City University (CCCU), during office hours. For details, visit http://www.cityu.edu.hk/ls/korean/klpt/index.html

In addition to hosting the KLPT, the CCCU is also responding to the growing demand for experts in Korean Studies by launching an Associate of Arts in Bilingual Communication Studies (Korean & Chinese / Korean & English) programme. It is the first of its kind in Hong Kong. In line with CityU’s emphasis on nurturing a new breed of multilingual professionals, the programme focuses on English/Chinese and Korean communication skills and knowledge about Korean culture for professional purposes.

What’s more, CityU is strengthening its reputation as a hub for language proficiency testing. The LS (French and Spanish sections) became ’s first officially approved centre in March 2005 to hold examinations for the Diploma de Español Lengua Extranjera (DELE, Diploma of Spanish as a Foreign Language) of the Instituto Cervantes.

In addition, LS has signed an agreement with the State Language Commission of China to set up a new Putonghua Training and Assessment Centre on CityU campus. The Centre will prepare CityU staff and students for the National Putonghua Proficiency Test.