The French and Spanish Section of the Division of Language Studies (LS) has become Hong Kong’s first officially approved centre to hold examinations for the Diploma de Español Lengua Extranjera (DELE, Diploma of Spanish as a Foreign Language) of the Instituto Cervantes. The DELE is the accreditation issued and recognized by the Ministry of Education, Culture and Sport of Spain for fluency in the Spanish Language. The Instituto Cervantes is responsible for organizing the DELE examinations while the LS is designated as the official examination centre. 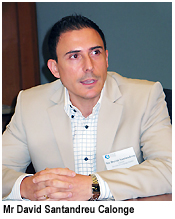 The Community College of City University has offered a Spanish studies programme since January 2004. Mr David Santandreu Calonge, Coordinator of the French and Spanish Section of the LS, said, “We are proud to become ’s only approved DELE examination centre to date. This acknowledgement of CityU’s achievement in the field stems from the dedication of our teachers and the high quality of our Spanish programmes.”

Ms Wanda Lau, Acting Head of LS, added that the Division would continue its efforts to provide quality Spanish programmes at CityU. “We look forward to seeing the results of our Spanish students in the first DELE examination to be held in May,” she said. 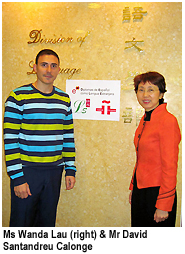 Three levels of DELE examinations are offered: Nivel Inicial (Intermediate-med/threshold level), Nivel Intermedio (High-intermediate level), and Nivel Superior (Superior Level). The Nivel Inicial examination recognizes  sufficient skill to manage situations which require an elementary use of Spanish and the Nivel Intermedio examination recognizes the necessary knowledge for general communication in Spanish, while the Nivel Superior examination accredits advanced ability to communicate in Spanish under all circumstances, including those which require knowledge of Spanish culture.

The French and Spanish Section is also the official test centre for the TCF (Test de Connaissance du Français of the French Ministry of Education) and the TFI (Test de Français International of the Institute of Internatonal Education).