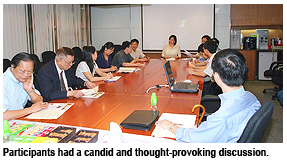 The Interpretation of Laws, a topical issue since the reunification of Hong Kong with China, was the subject of a Roundtable Discussion on 21 June in the School of Law (SLW) at City University of Hong Kong.

Presenting on Judicial and Legislative Interpretation in China were invited speakers from the National Judges College in Beijing: Professor Guan Yu Ying and Dr Wu Zhao Xiang.  Chaired by Dr Priscilla Leung, Associate Dean (External Affairs) of the SLW, the event attracted some 30 participants from law firms and associations as well as teachers, staff and undergraduate and post-graduate students from the University.

The speakers gave an overview of the history and perspective of the power of Legislative Interpretation of Standing Committee of the National People's Congress (NPCSC) and the power of judicial interpretation of the Supreme Court (SC) as well as the importance of precedent cases in the judgement of Chinese courts. 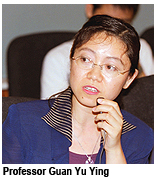 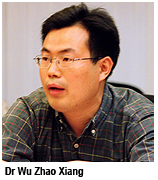 A number of topics of public concern were raised during the roundtable discussion, including the relationship between legislative and judicial interpretation, the improvement in the quality of legislation through judicial interpretation, the legal power of precedent cases and its impact of legal education in the future.  The discussion concluded in a positive and sincere manner with the group looking forward to the continued development of the legal system in China.

Launched in December 2004, the Roundtable Discussions serve as a forum in which academics, practitioners and public policy specialists from a variety of disciplines including law, economics, political science, public administration, and sociology can come together to discuss issues affecting society at large, providing a channel for promoting multidisciplinary and interdisciplinary research.  The Series maximises the intellectual the capital of the School and 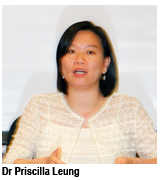 helps CityU continue to develop as a leading contributor to the community as well as to a greater body of knowledge in general.

Dr Pricilla Leung said: "CityU Law School's forte is to focus on Chinese and Comparative Law and all areas of commercial law.  We are trying to develop and strengthen our connections with Mainland China, which is an integral part of our teaching and research work."