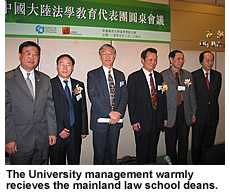 of ’s School of Law (SLW) received a delegation of 100 law school deans from reputable mainland institutions, 24 March. This was the biggest delegation of senior  legal experts ever sent to . Members of the delegation took part in a roundtable discussion with SLW faculty on the future of Chinese legal education. The delegation, comprising deans from , , Renmin University of China, , , Northwest University of Politics and Law and , among others, left for on 25 March for the most important legal sector exchange across the straits since 1992.

In his welcoming remarks, Professor Chang spoke of his recent visit to the Supreme People’s Court of the PRC, initiated by Dr Xiao Yang, President and Chief Justice of the Supreme People’s Court. Dr Yang was conferred an Honorary Doctor of Laws by CityU in 2003. Professor Chang was invited to tour the newly commissioned court and related facilities of the Supreme People's Court soon to be opened. Professor Chang stated that the Chinese mainland had shown respect for the court system and the legal profession, reflected in the modernisation of the facilities housing legal professionals. Professor Chang also explained to the delegation CityU's motivation for establishing the second law school in : to act as a bridge for mutual understanding and for convergence between ’s common law system and the mainland law system after the 1997 handover. CityU’s SLW persists in making Chinese law and comparative law a very important component of its curriculum for the benefit of society’s legal and academic arenas. The SLW actively promotes Chinese legal education and

has assumed a leading role in the research of Chinese law.

Dean Malanczuk began the roundtable discussions by introducing the objectives, programmes, teaching and research of the SLW. This was followed by an enthusiastic dialogue led by the mainland delegates. The delegates agreed that the future of the nation’s legal education must be founded on the mainland and, at the same time, face the challenges arising from globalisation. The mainland needs to train high-quality legal talent for advancement of the rule of law.

The mainland delegation is to visit 25 to 31 March. During the trip, the delegation will visit and and attend seminars for promoting legal academic exchanges between the mainland and .