The impact of economic globalisation has resulted in the World Trade Organization (WTO) assuming a significant role in economic, political and legal issues relating to international trade, investment and development. The School of Law (SLW) of the City University of Hong Kong and its WTO Law and Dispute Resolution Centre (WTODR) jointly hosted its first WTO & Greater China Economic Area Law Conference , 10-11 March, attended by 80 renowned WTO scholars and experts from the mainland, Taiwan, Macau, Hong Kong, Japan and Korea.

The Conference was inaugurated by Mr Raymond Young, JP, Director-General of Trade & Industry, Hong Kong SAR. “I commend CityU for organising this Conference which provided a timely opportunity to explore the interesting and sometimes controversial relationship between multilateralism and regionalism in trade, and to reflect on the implications of ’s rapid emergence as a major player in the global trading community,” Mr Young said. In his address, Mr Young also highligted the importance of the Closer Economic Partnership Arragement (CEPA) and the Regional Trade Agreements (RTAs) to global trade liberation.

In his welcoming remarks, Professor (Chair) Peter Malanczuk, SLW Dean, said “Since four Chinese entities – the mainland, , and – are members of the WTO, it is important to deal with the long-term integration of the different legal systems and traditions in the Greater China region. The Conference is a good opportunity for participants to exchange views and examine these issues more deeply.” 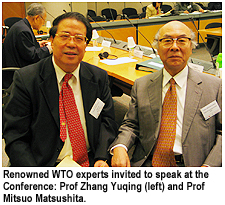 At the Conference, Professor (Chair) Wang Gui Guo, Professor D K Srivastava, Professor Anton Cooray and Professor M P Singh chaired various discussions. In the first session, leading WTO experts, including former Director of the Treaty & Law Department under the Ministry of Commerce, Professor Zhang Yuqing, who took part in China's accession to the WTO; Professor Mitsuo Matsushita, a founding member of the WTO Appellate Body; and Professor Yu Ronggen, President of Chongqing Academy of Social Sciences, were invited to make presentations covering, respectively, “The relationship between the WTO and Multilateralism & Regionalism”, “Problems in bilateral and regional free trade areas under the WTO framework”, and “The legal relationship between China and a free trade area with AESAN”. Other topics included the mainland and Hong Kong & Macau CEPA; ’s experience in free trade agreements; the harmonization of intellectual property law in Greater China; and the legal framework of economic integration among the mainland, , and . Details of the Conference are available at: http://www.cityu.edu.hk/slw/english/upcoming/pdf/WTO.pdf .

The Conference is expected to contribute to the negotiations at the upcoming WTO Ministerial Conference to be held in . The SLW is planning to publish a book based on the Conference papers. This will be the first publication on WTO related issues in the Asian region with contributions by Asian scholars. Building on its strengths in Chinese Law and its longstanding cooperation with mainland institutions, the School will host a Greater China Dean’s meeting on legal education on 24 March, and a Greater China Dean’s Conference in June.

CityU’s WTO Law and Dispute Resolution Centre is the first university-based centre, not only in and , but in the whole of the Asia-Pacific Region, that is dedicated to the study of the interaction amongst globalisation, legal development and international dispute resolution mechanisms. The Centre’s mission is to establish a globally recognized Centre of Excellence and become the leading research institute in the Asia-Pacific region for the interdisciplinary study of legal problems arising from economic globalisation in the region.