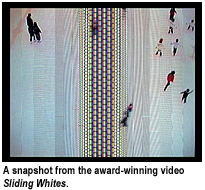 The short film Sliding Whites by Eric Siu , a fresh graduate of the School of Creative Media (SCM), is awarded Honorable Mention out of nearly 1,200 entries at the 11th International Media Art Biennale WRO. Eric is the first ever and only candidate to gain recognition in the prestigious Biennale. This once again exemplifies the SCM’s achievement in nurturing talent for the media industry.

The Biennale, organized by the WRO Centre for Media Art located in , is a major international event showcasing the latest developments in contemporary media art. This year’s competition attracted a record-breaking number of entries, including video works, installations, Internet art and performances from 46 countries and regions all over the world. Eric’s Sliding Whites was among some 70 outstanding works nominated by the jury and eventually nine awards were given. 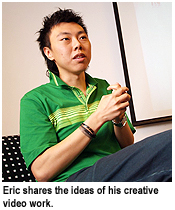 Eric has just completed his bachelor’s degree study at SCM. Sliding Whites was part of his coursework. He says, “The fusion of materials and vision creates the truth of colours. The film itself is an experiment on the cells of a television screen and the representation of colour and the originality of digital image.” Eric’s creative ideas and innovative presentation skills also won acclaim from Mr Hanspeter Ammann, a Swiss video artist, who said that “It is most joyful to watch the elegant and constantly changing movements. The author (Eric) successfully seduces us to listen to his poetic rhymes in white.”

Eric’s talent was unveiled earlier in 2002 when he took a Distinguished Award in the 8th Hong Kong Independent Short Film and Video Awards with his film Constructing Destruction. His video works have been selected for screening in the , , , , , , and , as well as .

Eric discovered his interest and potential in media art at an early age. He is glad that he chose to further his studies at SCM. He said, “The media art theories offered in CityU’s SCM programmes gave me a lot of stimulation and inspired me to explore the possibilities of new media art creation. I would like to thank all SCM professors, especially Associate Professor Dr Hector Rodriguez and Assistant Professors Mr Ip Yuk Yiu and Ms Linda Lai, for their inspiring teaching.” To pass the torch on, Eric has already joined the teaching force in digital media study in a local institute after graduation.