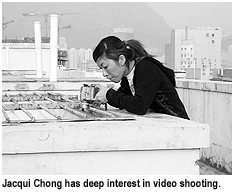 Miss Jacqui Chong, a second-year  School of Creative Media (SCM)student, has won awards in two open competitions, namely the “Women's Pixel Short Film Award”, organized by Nu Xing Wang (Female-Sex-Web) under the Association for the Advancement of Feminism, and the “Mobile Video Competition”, organized by the Arts Centre and CSL’s One2Free, clinching a championship and a bronze award, respectively. The awards once again prove that the creativity and excellence of SCM students is widely recognized in .

The Women’s Pixel Short Film Award was developed in order to encourage women to explore their bodies and their desire for sex through creative digital video works. Jacqui’s winning video, the unedited "Streaming", runs for 10 minutes. It depicts a woman whose belly is swollen after drinking water. At the award presentation ceremony, the short film was commended by Ms Leung Po Shan, an artist and one of the panel judges, who said, “Without directly portraying desire, the work exhibits a strong sense of a female’s sentiment and attitude towards sex.”

Jacqui was happy to receive her first ever prize in a video competition and she expressed gratitude to SCM Assistant Professor Mr Ip Yuk Yiu. “It was actually a performance video assignment,” she said. “However, Mr Ip found it creative and appropriate for the Women’s Pixel Short Film Award, which he encouraged me to enter. Mr Ip is open-minded and allows a great flexibility in students’ works. His receptive teaching style inspired me.”

Jacqui’s other winning work, "Flash Faces", entered in the Mobile Video Competition, excelled in the technical skill of photography. Jacqui videotaped her own different facial expressions with her mobile phone during a barbeque gathering with her friends. As an experiment, she attempted to create a flash effect by using the camera flash of her mobile phone. “I wanted to see if I could create a special effect,” she said, “by overcoming the problems of mobile phone cameras -- under-exposure and lack of editing facility. I got this idea from my courses in the SCM, which encourage bold attempts.” The Mobile Video Competition finalists’ 13 works were shown at the 10th Hong Kong Independent Short Film and Video Awards Festival held in March.

After completing her Associate Degree this year, Jacqui will pursue the Bachelor Degree of Arts (Hons) in Creative Media at the SCM, majoring in Critical Intermedia Laboratory. Jacqui wishes to enhance her knowledge in this area to further explore her creativity.