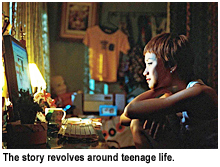 The independent film,"b420", directed and scripted by Mr Mathew Tang, a graduate of the School of Creative Media (SCM), is one of the selections for the 29th Hong Kong International Film Festival (HKIFF).  This once again demonstrates the SCM's success in fostering professionals in the creative media industry.

Mathew received his Master of Fine Arts degree from the SCM last year and “b420” was his thesis project and first feature film. He invited Mr Philip Lee, Mr Peter Yung and Mr Yee Chung-man, Assistant Professor of the SCM, Head of Film/TV Producing and Production Management of the for Performing Arts (HKAPA) and celebrated film and art director, respectively, to produce “b420”. Some twenty students from CityU and HKAPA, led by Mathew, were involved in filming work in . 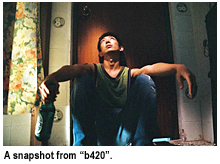 Before making “b420”, Mathew had been assistant director for numerous experienced film directors including Tsui Hak, Peter Chan, Lee Chi Ngai and Jackie Chan, among others. He was also the scriptwriter for Jacob Cheung’s “The Kid”. “CityU’s emphasises inspiring students’ thinking and provides fertile soil for cultivating media professionals," Mathew said. "My fruitful learning experience in the SCM also stimulated introspection about my personal direction and position in creative art. I appreciate the SCM’s professors and my filmmaker friends who encouraged me to give birth to ‘b420’.” The first screening of Mathew’s “b420” in the Festival received spontaneous applause from the audience.

“b420” conveys the dual meaning of “before twenty” and “before too old”. Three lives criss-cross as the main characters, teenagers Koey, Willy and Simon, are good friends with divergent personalities. The film tries to reveal human relationships through considerations of love and death. Up-and-coming actors Miki Yeung, Sam Lee and Ben Hung play Koey, Willy and Simon. 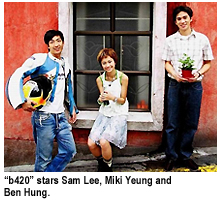 “b420” is one of the films in the Festival's "[si] @ hkiff"section. "[si] @ hkiff" is a brand new section that screens a series of films specially selected to suit the tastes of young people with the aim of encouraging them to participate in film-related events. "[si]" is the international phonetic alphabet representation of the word “see”. To "[si]" intends to convey the meanings “to seek” and “to sense”; it also refers to “intelligence” and “involvement”. The five films selected for the "[si] @ hkiff"section come from and  demonstrate the new generation’s unique and creative ideas in film.

On April 5 at 6:00 pm “b420” will be on show again at the . That same day, at 12:30 pm, “City University of Hong Kong Selection” will showcase SCM students’ work in the HKIFF section called “The Devil’s Playground – Joint Universities Programme”.

A dream comes true for CityU student, Christine To