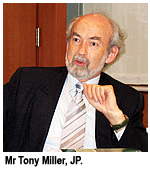 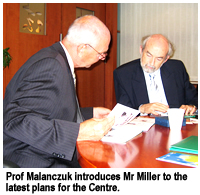 Founder and Director of CityU’s WTODR Centre, “and we shall familiarize Miller with the activities of the Centre and discuss with him recent economic issues faced by Asian countries.”

Interested in the first and only WTODR Centre in the Asia-Pacific region distinctively focusing on both the WTO and trade and commercial dispute resolutions, Mr Miller proposed a meeting with Professor Malanczuk before setting off for Geneva, aiming to get more background information on the mechanisms and progress of the Centre and hence to generate stronger ties between the WTO and the Centre. 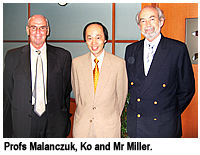 “It is important for academic institutions to bond with the Government. The visit has served as a sharing of information, as well as a boost for academic development on issues relating to the WTO law. Also, it will be of great value to practitioners like Mr Miller as inspiring input,” Mr C Raj Kumar, Deputy Director of the WTODR Centre, remarked.

The meeting commenced with series of friendly reports on Mr Miller’s mission, and slowly turned to the geographical and economic importance of , where lies the headquarters of the WTO. 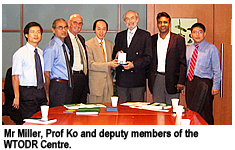 Ambitious plans
“The Centre persistently explores issues that are not directly related to economics in a narrow sense, and yet do have an impact on the big picture, economic and human rights for instance, apart from the two main focuses of the WTO laws and international dispute resolutions,”  Professor Malanczuk added. “What we are trying to do is to link up the three stars as one galaxy, and to do more research on that field. I think it is very possible for us to generate some useful and new ideas on the development of the area.”

“Pretty ambitious,” Mr Miller responded,nodding in agreement while hearing of the Centre’s future plans. “I am confident we will arouse the interest of other academic institutes like the , which is also running a similar course, in cooperative projects specifically focusing on these issues,” Professor Malanczuk further explained .

“Despite the negative impact of SARS, the School of Law has been very successful in generating lots of financing activities, so, I think the School is positioned quite well, financially speaking,” Professor Edmond Ko said. Professor Ko praised Professor Malanczuk’s work in building up a solid international network and relationships tha strengthen the SLW's potential to achieve missions once considered impossible.

Taking away with him dozens of ideas and background information about the WTODR, Mr Miller sets off for on 16August.