On Thursday, 3 February, Ms Margaret Ng, a Member of Hong 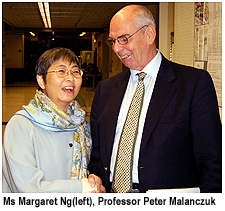 Kong’s Legislative Council, was welcomed to CityU by Professor Peter Malanczuk, Dean and Professor (Chair), School of Law (SLW). Ms Ng’s presentation, Just Law: Do Laws in Hong Kong Necessarily Promote Justice?, was the second in the SLW’s Eminent Speakers Lecture Series providing a public forum in which the University can  interact with the wider community on issues that are relevant to our times and promote intellectual discourse among scholars and students at CityU.

“The law is everybody’s business,” Ms Ng noted. “And law is not at all the same thing as justice. One aspect of law is regulatory, but I’d like to talk about law in connection with justice and the rule of law… Law is a human institution—our endeavour to approximate justice. What is justice? There is such a thing as a ‘sense’ of justice—an evenness, a harmony, or a ‘fair share’ idea. The Greeks imagined it as a state of 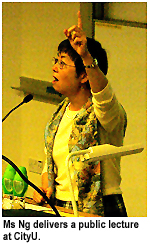 equilibrium. As it is said in Chinese, ‘When things are not level, they make a noise.’ Likewise, I put to you, when something goes wrong in society, somebody wants to speak out.”

Ms Ng is a commentator and writer in both English and Chinese. She served as Publisher of Ming Pao from 1988-1990. She remains a regular contributor to the South China Morning Post and is the author of some 12 Chinese titles. She is currently a member of the Operations Review Committee of the Independent Commission Against Corruption (ICAC). She received her law degree from the and a PhD from .

"Moving forward with democracy and making a better place to live under the rule of law are burning issues which I feel passionate about," Ms Ng says. "The rule of law has been and is still recognized as incredibly important for and in the maintenance of a free and just society."

The SLW's Eminent Speakers Lecture Series serves as a forum in which distinguished individuals from all walks of life are invited to present their views on topical issues relevant to the contemporary world. The lectures are in line with CityU's emphasis on Whole Person Development. There are three lectures each semester.