An interdisciplinary discussion on corruption and good governance

At a recent roundtable discussion jointly organized by CityU’s School of Law (SLW) and the China University of Political Science and Law (CUPL), academics from various disciplines exchanged views with practitioners on key issues relating to the problem of corruption and good governance in Asia.

The roundtable discussion, held on December 29, 2004, was chaired by Professor Peter Malanczuk, Dean and Chair Professor of the SLW. “We had a very good discussion with a deep and broad sharing. I’m particularly impressed by the openness and frankness of all the participants. We are learning from each other’s expertise. I look forward to more discussions of the kind on this important topic in future,” said Professor Malanczuk, who is also Director of the WTO Law and Dispute Resolution Centre (WTODR Centre). 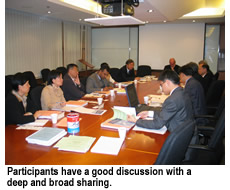 The participants focused their discussions on a variety of issues including the definition of corruption, transparency in governance, accountability of the administrators and approaches to tackling corruption in both developing and developed countries. They also shared views on current practices for ensuring corruption-free governance in both public and private organizations in different regions. On examining the effectiveness of independent institutions in fighting corruption, the role of the Hong Kong ICAC was discussed at length. 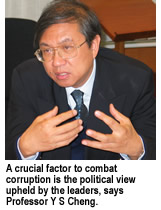 Professor Y S Cheng said delegates from both Hong Kong and the mainland appreciated the importance of the topic. “It requires various fronts to combat corruption. A crucial factor in many societies is the political view upheld by the leaders,” he added.

Researchers taking part in the forum have a common interest in exploring the connection between corruption and human rights abuses. The mainland delegates were particularly interested in comparing the situations in Hong Kong, the Chinese mainland and Australia. “It was a stimulating discussion enlightening us to handle corruption from a multi-disciplinary 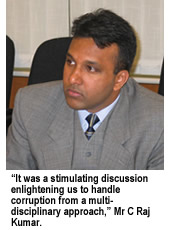 approach,” Mr C Raj Kumar said. He has just completed a research project entitled “Corruption and Human Rights – Promoting Transparency in Governance in Hong Kong, Japan and India”. This is a comparative study on the experiences of promoting transparency in governance policies from a human rights perspective. Mr Kumar has also been invited by Japan’s United Nations University to participate in a research project organized by the International Institute for Ethics, Law and Governance at Griffith University, Australia, in April.

In early December 2004, Professor Malanczuk led a delegation on a visit to the CUPL. The two institutions agreed on more collaboration through joint research projects and academic/student exchange. The SLW is also endeavouring to strengthen ties with other mainland institutions.

Law lecturer dedicated to human rights, scholarship, and society
The judicial system in China and its reform
Sharing legal knowledge with the Sri Lanka Judiciary