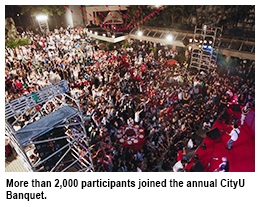 Themed “Union@CityU Banquet”, this year’s annual CityU Banquet was held on 31 October. This student-led event brought together staff, students and alumni to meet and chat as well as enjoy different cuisines and performances as a family in a relaxing atmosphere.
More than 2,000 participants and Council members sitting at a total 180 tables enjoyed a wonderful evening.
Guests included Dr Norman Leung Nai-pang, CityU Pro-Chancellor, Professor Way Kuo, CityU President, Professor Horace Ip Ho-shing, Vice-President (Student Affairs), Mr Sunny Lee Wai-kwong, Vice-President (Administration), and Mr Clovis Lau Koong-yep, Chairman of the Convocation.
Together with members of the executive committee of the 29th Students’ Union, the guests held a simple yet solemn toast to start the dinner, expressing their wishes for the 30th anniversary of the University.

In his welcoming address, Professor Kuo said the 30th anniversary was a milestone for the University and that he hoped that students would continue to work hard, contribute to society and be proud of CityU. The dinner party belonged to students, and the future was in their hands, he added.

Mr Lau said banquet has become an indispensable part of CityU’s tradition since it was first held 19 years ago. While November is the month for Congregations, he encouraged students to promote the spirit of CityU and contribute more to Hong Kong society.

Thomas Leong Chun-yiu, Acting President of the 29th Students’ Union, said the many round tables at the party represented the union of the CityU community and that he hoped the dinner party could facilitate communication across the University. He also joined other executive committee members in leading the anthem of the Students’ Union. 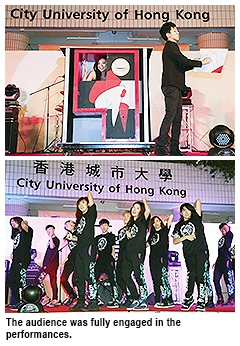 During the dinner, there were dance performances by the Dance Society, an impromptu jam by the Audio Engineering Society, an acappella performance by the Music Society and an exciting display by the Magic Society.
A fashion show was also held, with the participation of many students, who dressed up like characters from the movie Monsters University, traffic lights, CityU’s red doors, the video game Tetris, the Statue of Liberty, and jelly fish. 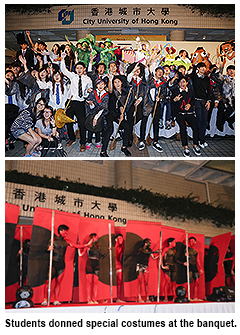 Dressed in their interesting costumes, they sang and danced enthusiastically on stage. Some students who had not taken part in the fashion show donned special costumes such as a banana, supermarket food, barbarians, puppets from the movie Saw, and Chinese zombies.
Students greeted the performance of the popular band Supper Moment with huge cheers and, arms held aloft, they sang along with the band and insisted on an “Encore” at the end of the band’s set. The one-man-band “The pancakes” then amused the audience by singing like a child with sarcastic verses on current affairs. Finally, the fashion show and lucky draw brought about a perfect finale.