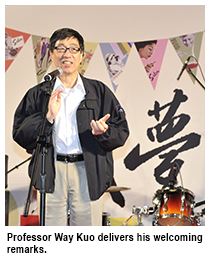 More than 2,000 Council members, faculty and staff, students and alumni at 178 tables enjoyed a delightful evening at this year’s annual CityU Banquet held on 1 November under the theme of Dream@CityU.
The dinner party started with a simple but solemn toast led by members of the executive committee of the 28th Students’ Union.
Professor Way Kuo, University President, told two stories in his welcoming address aimed at encouraging students to identify their goals and stick to their dreams, echoing the theme of this year’s banquet.
The first story was about a graduate attending a job interview. When asked what type of job he was looking for, he said he wanted his own quiet, air-conditioned office and, most importantly, to be close to the lift. The interviewer immediately thought of a suitable post – a lift operator. 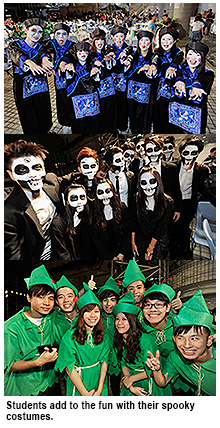 The second story was about a graduate of CityU’s School of Creative Media. She started up a promotional magazine company with capital of only a few thousand dollars. In the beginning, her small company was looked down upon by others. However, with perseverance and hard work, she finally attracted some clients.
Like last year, many students donned spooky costumes for the occasion. Some came dressed as characters from the recent movie Monsters University and as scary puppets from the movie Saw, mummies and Chinese zombies. Their unique look and special style delighted participants at the banquet. In addition, several teams took part in a fashion show and sang and danced on stage.
A series of performances were arranged during the banquet. The Dance Society performed some stunning routines and the Band Society kept the audience entertained with their music performance. When the popular band Supper Moment started their set, everyone clapped along with their arms held aloft.
Professor Kuo was greeted enthusiastically when he was invited by the Music Society to sing two Chinese songs, “The moon represents my heart” and “Wave after wave”. At the end of the songs, many shouted “Encore!”
The most exciting moment came when the Magic Society cast their spells and had Professor Kuo emerge from a tent. He then joined in the show, carefully inserting a sword into a wooden box which had a student inside. 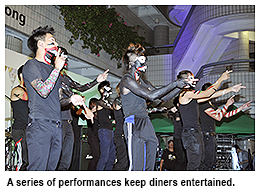 Timothy Lee Ho-yin, President of CityU Students’ Union, said the objective of the Union was to serve fellow students, adding that this “dream” remained unchanged.

The tasks of the current executive committee of the Union would be completed after the banquet, and he hoped that all University members would remember the evening as well as CityU’s “dream”, he said.