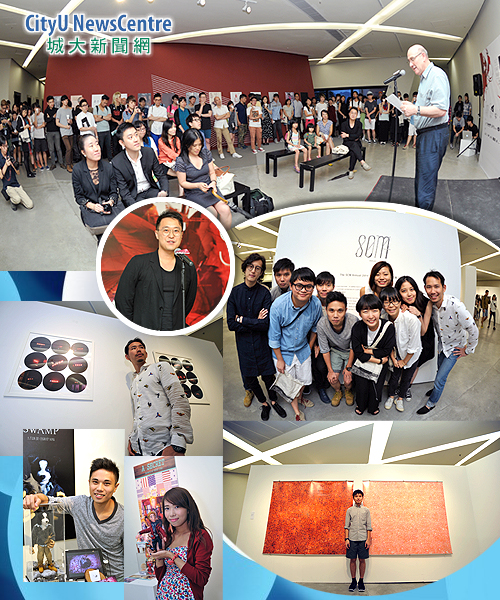 Students of the School of Creative Media (SCM) have had an opportunity to showcase their work at the SCM Annual 2014 at City University of Hong Kong.
Altogether 57 graduates have exhibited work covering a variety of topics, such as the identity of Hong Kong people, homosexuality and social systems.
The artwork had been divided into four categories—photography, installation, cinematic arts, and animation—under the theme “Glitch”, which describes a sudden malfunction that diminishes under an automatic correction of a perfect system, and is nearly impossible to troubleshoot.
The event has provided an opportunity for top professionals in the creative media design industry to share a special moment with talented graduates who seek to make their dreams come true in the field of art and media.
Professor Jeffrey Shaw, Dean of SCM, and Mr Doryun Chong, Chief Curator of M+, Hong Kong’s new museum for visual culture, officiated at the opening ceremony on 18 July.
The exhibition will be held through 31 July, and highlighted works include:
•         Here, there, a series of photos taken from Hong Kong people’s point of view. The photos of Taiwan and mainland China were recomposed to explore the issues of identity.
•         Let the sorrow flow and Miss Tong are short movies about homosexuality; Invisible visible and Untitled criticise social systems.
•         The octopus game, an installation requiring the player to insert an Octopus card to play the game, which is about making the choice of self-interest and ethics.
•         Tree man, an animation depicting a tree which does not want to be a tree. But it remains as a tree due to the reality and its fate.