​
Over 70 graduating students from the School of Creative Media (SCM) of City University of Hong Kong (CityU) will showcase their creativity at the SCM Annual 2013 from 6 to 21 July at the Run Run Shaw Creative Media Centre.
Based on the theme “Resonance”, this year’s graduates make use of various media such as installations, photography, animation, film and sound to express their artistic originality in works they hope will resonate with viewers. 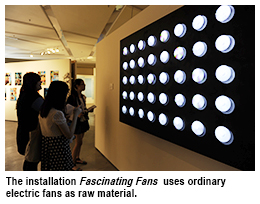 Professor Jeffrey Shaw, Dean of SCM said, “The CityU School of Creative Media is an incubator for creativity, aiming to produce the best possible conditions for individual and communal originality to flourish.”
Among the installations is one called Fascinating Fans by Ho Ka-ling, a graduate of the Bachelor of Arts (Hons) in Creative Media. Projecting beams of light on a few dozen small fans measuring around 10cm in diameter each, she has produced a colourful and dazzling installation that shows art is not esoteric or detached from us. She said, “Beauty is often hidden in daily objects. Very few people attempt to uncover the potential in these objects. I hope to remind all of us that art in fact resides in our daily life.” 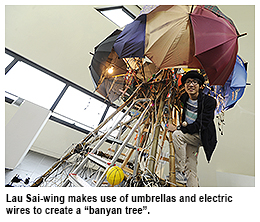 Another graduate, Lau Sai-wing, bemoans the increasing distance between city dwellers and nature, which prompted him to use umbrellas and electric wires in his installation, Small Banyan. He said, “When I was little, I used to play under a banyan tree with my sister and my cousins. We did not feel the need for other gadgets, and we had great fun. But the children around us these days are surrounded by electric products. They do not even know how to climb trees.” On his artificial banyan tree, he hung his childhood toys. Viewers are invited to climb up the tree to visit his “secret haunt” using the four ladders provided.
Approximately 50 films and animation works will be shown at this year’s exhibition, which explores issues such as the meaning of life, fear, karma, death and the situation of the Hong Kong-born children of mainland parents.

There is a stop-motion animated film, The Untold & Unseen, created by artist Lam Ho-tak. He finds that some of his friends live only to work and eat. When one works only to survive and survives only to work, one becomes a soul-less machine. He asks, “Is there a better way to live?” At the end of the film, the protagonist walks out of his tunnelled world and explores the world outside, which is yet unknown to him.
Students will be on site to explain the creative impulses behind the exhibits. The opening hours are from 12:00 noon to 8:00 pm. For more information, please visit www.scmannual.com.
In addition, SCM is showcasing the creative achievements of its graduate students in a new media art exhibition “SCM7/K11- Transcendent Ordinariness” from 6 to 30 July at K11 Art Mall. 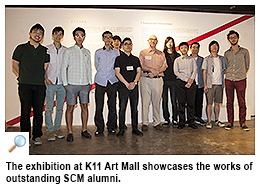