The annual Thanksgiving Dinner at City University of Hong Kong (CityU) on 19 November acknowledged alumni, donors and friends for their longstanding support over the years.

More than 160 donors, guests, Council members, alumni and students took part in the event which was organised by the Community Relations Committee (CRC) under CityU’s Council. The dinner started after Council representatives and CRC members gave a simple but solemn toast on stage.

CityU had made significant advancement in recent years, said Mr Herman Hu Shao-ming, Council Chairman, in his welcoming address. According to the latest university rankings published by Quacquarelli Symonds (QS), CityU is ranked 104th in the world and 12th among Asian universities.

Mr Hu said he was grateful to all donors and supporters for helping the University achieve its mission to nurture talented young people for the future well-being of society. With more new buildings and facilities to be opened for use, CityU can further improve its environment for research and education and enhance the quality of its teaching and learning.

Dr Joseph Lee Chung-tak, CRC Chairman, said CityU had worked hard to instill students with the right values, and he hoped that they could contribute to society with their knowledge. He thanked, on behalf of the University, all donors for their generous support.

The aim of Thanksgiving Day in the US is to give thanks for the blessing of the harvests, said Professor Way Kuo, CityU President. It has now become a day in many countries for beneficiaries to express their gratitude. In his address, Professor Kuo also encouraged students to make more contributions to the University and the local community. 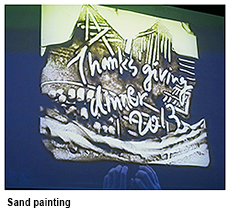 Souvenirs were presented to members of Alumni and Staff Giving Clubs at the dinner. There were also performances by a band and a painter, who presented the University’s education philosophy and its new academic buildings using sand.