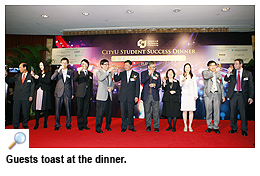 A record-high 400 donors, Council members, guests, alumni and students from City University of Hong Kong (CityU) participated in the annual thanksgiving dinner named the “CityU Student Success Dinner” on 21 November. It was an occasion to express CityU’s gratitude to its benefactors and supporters, as well as to raise funds to support student development at the University. A sum close to HK$6 million was raised.
The event was hosted by the Community Relations Committee (CRC) under the Council of CityU. It adopted “Student Success” as its theme. In his opening remarks, Council Chairman Mr Herman Hu Shao-ming said CityU had taken great strides to become one of the world’s top 100 universities. It is ranked 95th in the latest Quacquarelli Symonds (QS) world university rankings, and 12th in its Asian university rankings.

Mr Hu said CityU’s achievements were evident in a range of disciplines, including its leading position in the science and engineering field, as well as in the Chinese language and translation curriculum. The development of the virtual display technology by the School of Creative Media (SCM) in partnership with the Dunhuang Academy was another highlight, he said.
Using pioneering virtual reality technology, the Buddhist wall paintings inside Cave 220 of the Mogao Grottoes at Dunhuang had been brought alive in a large panoramic 3D projection theatre, he added. “The development of this technology is so impressive that the SCM has been invited to participate in an event at the Smithsonian Institute in the US at the end of November,” Mr Hu said.
Student success is the success of the university, said Dr Joseph Lee Chung-tak, CRC Chairman. “We are proud to provide Hong Kong with future professional leaders who have the right values, skills and knowledge, and to help the country become a better place,” he said. Mr Lee also thanked donors on behalf of CityU for their generosity in supporting the development of the University. 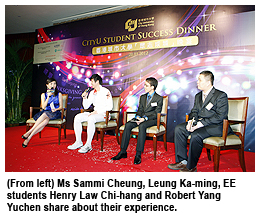 CityU President Professor Way Kuo reiterated the importance of “Discovery and Innovation” under the new 334 academic structure with reference to how Finnish people have developed innovative ways of preparing salmon for consumption and how US President Barack Obama said in his victory speech after the recent US presidential election that teachers should teach students to discover.
“This is what we are doing at CityU,” Professor Kuo added, referring to Mr Obama’s comments. 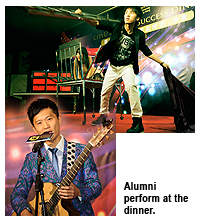 In addition to the presentation of souvenirs to members of the Alumni and Staff Giving Clubs, Leung Ka-ming, a Year 3 applied social studies student and the first épée fencer to represent Hong Kong in the London Olympics; two of the six electronic engineering students selected as interns to provide IT management services at the Olympics; and alumna Miss Sammi Cheung Sau-man who took part in an exchange programme and the Miss Hong Kong Beauty Pageant were invited to share their achievements and experience on stage.
Mr Chet Lam Yat-fung, Mr Chris Poon Ho-ting and Mr Tsang Ka-kui, CityU alumni, gave marvelous singing and magic performance during the event, too.
In addition, an auction was held to solicit further support for student development at CityU. Major donors included:
​