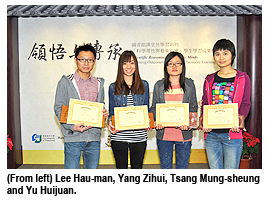 A prize presentation ceremony for a Chinese calligraphy contest titled Enchanting Brush of Minds was held on 18 December at the Run Run Shaw Library of City University of Hong Kong (CityU), marking the end of the Library’s Outside Classroom Learning Activity series for the semester.
A total of 20 awards were presented to winning students in four levels of the contest. Held on 4 and 5 December, the contest was an integral part of the series, called Scientific Reasoning and Artistic Minds. The contest received 53 entries submitted by students from more than 20 departments. Seven international students participated in the contest along with their local and mainland Chinese peers.
Contestants competed in four levels: with a single character “靜” for level one; an idiom “溫故知新” for level two; “一日不讀書，口中生荊棘” for level three; and a saying by the famous Chinese historian Chen Yinke “取異族之故書與吾國之舊籍互相補正；取外來之觀念以固有之材料互相參證” for level four. 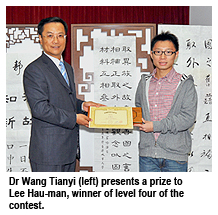 After screening by calligraphers from the Chinese Civilisation Centre (CCIV), and a second round judging by CCIV Director Professor Cheng Pei-kai and calligrapher Dr Wang Tianyi from the China Calligraphers Association, one winner was selected for each of the four levels and 10 recipients for the Award of Excellence.
Yu Huijuan (Department of Media and Communication), Tsang Mung-sheung (Department of Biology and Chemistry), Yang Zihui (College of Liberal Arts and Social Sciences) and Lee Hau-man (Department of Mathematics) were the top prize winners.
The contest provided the Library with an opportunity to introduce various databases to students. For example, students can find the origin of the Chinese character “靜” and the idiom “溫故知新” from the Siku Quanshu (Wenyuange Edition) online. The Korean Classics Indexing Project Database explains “一日不讀書，口中生荊棘” by the famous Korean calligrapher An Jung-Geun. China Reference Works Online is a good place to start a journey through the works of Chen Yinke.
Lee Hau-man, winner of level four, has been practising Chinese calligraphy for 12 years. “The databases helped me to know the sources and meaning of the content I wrote. As a result I could write down the origin of the work I quoted, which is so important for calligraphy,” he said.
Lucia Ondrusekova from the UK and Lee Soo Jin from South Korea won the Award of Excellence for International Students. Four other students received the Jury Special Prize. 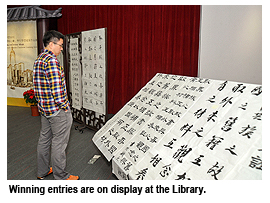 “I am very into Chinese culture. I started to get interested in Chinese calligraphy from a trip to China when I was little,” said Lee Soo Jin.
Yu Huijuan, winner of level one, just started practising brush writing during a calligraphy workshop held by the Library in October. “I feel I have cultivated a deep interest in calligraphy and will practise more. I hope there will be more learning activities available,” she said.
The Library is dedicated to promoting humanities and arts outside the classroom. In September, CityU and the Painting and Calligraphy Society of the Chinese Academy of Engineering (CAE) jointly organised an art exhibition in Hong Kong, showcasing more than 100 works of calligraphy and art by academicians of the CAE. Six calligraphy workshop sessions were held in the Library in October, followed by a series of writing workshops encouraging students to read, learn and write.
Winning entries of the calligraphy contest are on display at the Library.