​The curved roofs of the Hong Kong Convention and Exhibition Centre and of the Sydney Opera House show how mathematical theorems in geometry and elasticity can be applied to the real world, said Professor Philippe G. Ciarlet, University Distinguished Professor of the College of Science and Engineering (CSE) at City University of Hong Kong (CityU) on 7 December. 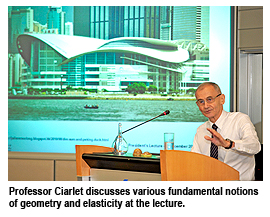 Professor Ciarlet delivered the 12th lecture, titled “Geometry and Elasticity”, in the President’s Lecture Series: Excellence in Academia. It was attended by about 200 staff, students and alumni.
In his talk, Professor Ciarlet reviewed several advances accomplished during the last decades in the theory of elasticity, with special emphasis on available existence theorems, as well as the geometrical notions that naturally appear in the modeling and in the mathematical analysis of the various models encountered, such as the Brouwer topological degree or the Gaussian curvature of a surface.
Professor Ciarlet also discussed the application of Gaussian curvature to cartography, which shows that it is impossible to draw a map that preserves distances.
And despite the wide use of models such as Koiter’s model in the computation of shells, i.e., curved “thin” elastic structures, such as the cooling towers of nuclear plants, an existence theorem (a theorem that states the existence of a solution to a problem or equation) is still not available today for some of these models. The search for such existence theorems is what Professor Ciarlet and many other mathematicians are actively pursuing. 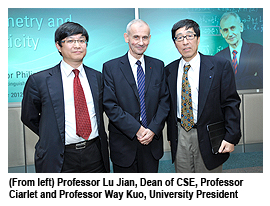 His current research focuses on proving existence theorems in nonlinearly elastic shell theory through the construction of stored energy functions that satisfy various conditions, such as preserving the orientation, coerciveness, polyconvexity, etc.
When asked if there was an existence theorem, would Sydney’s Opera House or the Convention and Exhibition Centre in Hong Kong be designed differently? “Probably not” was Professor Ciarlet’s answer. “People take the best models available for computation. Although the models not supported by existence theorems are not perfect, they give reasonably accurate answers; besides, the computations are always carried out with a very high safety factor,” he added.
Professor Ciarlet said his desire to find an existence theorem is not only a quest for science itself. “It also provides satisfaction to the mind. If a given set of equations cannot be mathematically proven to have a solution, it gives mathematicians and engineers a feeling that maybe the model is wrong, and thus indicates that there is room for improvement.”
A French mathematician, Professor Ciarlet is also known for his work in numerical analysis, in particular the mathematical analysis of the finite element method, applied to elasticity. He has also made contributions to the analysis of partial differential equations and to differential geometry. Prior to joining CityU in 2002, he was a Professor at the Université Pierre et Marie Curie in Paris for 28 years. He is a member of the French Academy of Sciences, a foreign member of the Chinese Academy of Sciences, and a member of six other academies in Europe and Asia.

In search of a Land of Happiness