​City University of Hong Kong (CityU) conferred honorary doctorates on three prominent persons at the Honorary Awards Ceremony on 13 November in recognition of their significant achievements and contributions to the well-being of society. The Hon Leung Chun-ying, University Chancellor, presided over the ceremony.

The three outstanding recipients were: Professor Bai Chunli (Professor Bai was awarded the degree in absentia), President of the Chinese Academy of Sciences (CAS); Mr Hu Fa-kuang, Honorary Chairman of Ryoden Development Limited, and Dr Allan Zeman, Chairman of the Ocean Park Corporation and Chairman of Lan Kwai Fong Holdings Limited.
Professor Bai, Honorary Doctor of Science, is not only one of China’s most eminent scientists and an outstanding nanotechnology pioneer, but also a highly accomplished science and technology leader. His research spans many areas, including the structure and properties of polymer catalysts, X-ray crystallography of organic compounds, and molecular mechanics and extended X-ray absorption fine structure (EXAFS) research on conductive polymers. He has a long list of scientific publications and has won more than a dozen prestigious awards and prizes at the national, ministerial and provincial levels.
From mid-1980s, Professor Bai devoted himself in particular to the study of scanning tunnelling microscopy and established the Youth Laboratory of Nanoscience and Technology at CAS. He was promoted to the CAS Vice-Presidency in 1996, and was elected to membership of the Academy in 1997. He was promoted to become the CAS Executive Vice-President in 2004, then CAS President and Chairman of the Presidium of the Academic Divisions of the CAS in 2011. In September this year, he was selected as the new President of the Academy of Sciences for the Developing World.

Mr Hu Fa-kuang received an Honorary Doctor of Social Science. A chartered engineer, he founded Ryoden Engineering Limited, a former company of Ryoden (Holdings) Limited, in 1966. Under his leadership, Ryoden became a multinational conglomerate, engaged in diversified areas such as semi-conductors, building materials, household electronic appliances, electric power generation plants, industry automation, E&M engineering, property development, hotels, Chinese medicine, and fashion, with business interests in Hong Kong, mainland China and Southeast Asia.
Mr Hu is very active in public service and has taken up significant roles in many government and public organisations. Mr Hu is a renowned sports advocate, too. He is currently Vice-President of the Sports Federation & Olympic Committee of Hong Kong, China, and Life Honorary President of several sports associations in Hong Kong. In appreciation of Mr Hu’s significant contributions to sports development and his support for the University, CityU named its sports centre as the Hu Fa Kuang Sports Centre in 2010. 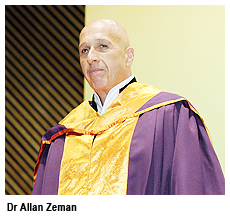 Through innovative ideas and hard work, Dr Zeman, Honorary Doctor of Business Administration, has transformed Lan Kwai Fong in the Central District of Hong Kong into a world-renowned tourist attraction, enhancing Hong Kong’s international reputation in the process.
Having lived in Hong Kong for over 40 years, Dr Zeman is very involved in government services and community activities. He has spearheaded new initiatives at Ocean Park, where he has been Chairman since 2003. He has also served as a member of the General Committee of the Hong Kong General Chamber of Commerce, member of the Board of the West Kowloon Cultural District Authority, and Chairman of its Performing Arts Committee. In recognition of his distinguished public and community service, particularly his significant contributions to the tourism industry and cultural development, he was awarded Hong Kong’s Gold Bauhinia Star and the Grand Bauhinia Medal. He has also been honoured by leading organisations as businessman and stylemaker of the year.
In addressing the graduates in his note of thanks, Dr Zeman said, “Family and roots are the bedrock of a successful career. The people who influenced you, inspired you, shaped you and cared for you are not going to go away now that you are graduates heading for the workforce. They will still be there, supporting you from the wings, and you should look in on them from time to time. Keep in touch with your alma mater, CityU, maintain your network, stay grounded.” He also encouraged the graduates to follow their hearts, pursue their dreams, and do what they believe in. 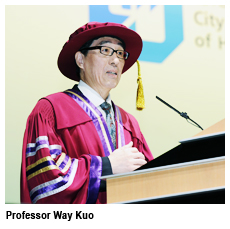 Dr Norman Leung Nai-pang, Pro-Chancellor of CityU, Mr Herman Hu Shao-ming, Council Chairman, Mr Raymond Or Ching-fai, Deputy Council Chairman and Professor Way Kuo, President, also attended the ceremony.
Professor Kuo said in his speech that students in different disciplines should value learning and the acquisition of the basics of their specialised fields; and they should apply themselves to learning about the latest developments in their fields. “When your knowledge is eclectic, try to make your feelings varied, too. You should identify yourself with others and the universe. Once you have an expanded mind and heart, you can make yourself rich in knowledge, great in sympathy, and immense in love. You can make remarkable contributions to society and human progress,” he said.
Summer Shiu Wai-sum, Bachelor of Business Administration (Honours) in Marketing, represented the graduates. “Fear will never bring you success. Only perseverance and enthusiasm can lead you to excellence. Let us always bear in mind that ‘You always pass failure on the way to success,’” she said.
The 2012 Congregation is being held from 13 to 20 November. This year CityU produced 7,230 graduates through its provision of quality professional education, comprising 161 doctor of philosophy degrees, eight doctor of business administration degrees, seven doctor of juridical science degrees, 11 engineering doctorates, eight master of philosophy degrees, 2,728 master’s degrees, 204 postgraduate diplomas/certificates, 3,733 bachelor’s degrees, and 370 associate degrees.