​“People don’t like economists because we’re always telling them what you can’t do,” said Professor Thomas Sargent, Professor of Economics at New York University, at the latest City University (CityU) Distinguished Lecture. Yet judging by the number of people who attended the fully subscribed lecture on 28 September, he is clearly mistaken on that one point. 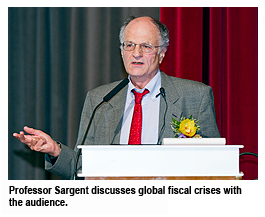 Professor Sargent, who won the 2011 Nobel Prize in economics together with Professor Christopher Sims, was in Hong Kong to speak about the fiscal crisis in Europe and how the early history of the United States might offer some useful analogues.
However, he was reluctant to make any firm recommendations based on US history, saying that his talk would be like René Magritte’s famous painting, This is not a pipe (which is in fact about a pipe).
At the beginning of his lecture, Professor Sargent outlined the difficulties currently being faced by the European Union. Individual countries such as Greece, Spain, France and Italy hold enormous debts, which are trading at deep discounts on the bond market. But because of unclear policies regarding bailouts and the inability of the European Union to raise revenues, there are no certain solutions
Professor Sargent believes that European voters now face a number of profound questions that have yet to be resolved: Who pays what? How does Europe reconcile the generosity of the modern welfare state with its ability to pay for these services? And what kind of political and economic union should Europe be?
Further, he asked whether governments should default on their debts, and should a central government bail out subordinate states.
Professor Sargent said that it is impossible to know the future as it is uncertain. But “we can learn something about the future from the past, from my own country,” he said.

When the 13 original colonies of the United States fought a war of independence to gain their freedom from Great Britain, he said, these separate sovereign states incurred huge debts. But the problem was that the central government of the time, according to the country’s first constitution, was not permitted to raise revenues.
“Fiscal crises often create political revolutions,” said Professor Sargent. And so the founding fathers rewrote the constitution and took away the states’ fiscal sovereignty. By 1790, the central government had completely refinanced its own debt and that of the 13 states.
The founding fathers had recognised that the central government should not default on the debts of its subordinate states nor should it refrain from bailing them out in times of economic difficulty. However, this created a situation of moral hazard, as the states believed that if the federal government were willing to rescue them once it would do so again. This proved not to be the case years later when the states again ran into financial trouble and appealed for aid. This time, however, the federal government refused and as a result the states were subsequently required by their own constitutions to balance their budgets.
There are many parallels between the fiscal problems faced by the early republic and today’s Europe. Professor Sargent, though, said he would prefer if people drew their own conclusions while warning that his analogy is not perfect. Early America had no social welfare system and the labour market at that time, which excluded women and depended heavily on slavery in the southern states, was very different from modern Europe.
However, if “economics is just common sense beneath all the maths,” as Professor Sargent avers, the resolution of the fiscal problems faced by the United States at the beginning of its history might well provide a number of lessons that could be applied to Europe today.
Professor Sargent’s views were echoed by Professor Way Kuo, CityU President, who compared the renowned economist’s writings on uncertainty with the University’s own attempts to bring a cross-disciplinary approach to the area of risk.