Academician Pan Yunhe, Executive Vice-President of the Chinese Academy of Engineering (CAE), offered his views on the relationship between art and science in his lecture titled “Science and Art – Integration of Scientific Reasoning and Artistic Minds” at City University of Hong Kong (CityU) on 26 September. 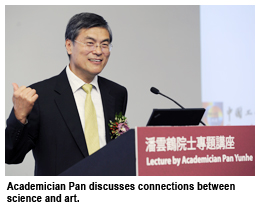 The lecture was held in conjunction with the exhibition “Art Exhibition in Hong Kong by the Painting and Calligraphy Society of the Chinese Academy of Engineering” jointly organised by CAE, CityU and The Chinese University of Hong Kong.

Academician Pan pointed out in the beginning of his talk that science and art were connected. They both stem from a human’s desire to understand the world. Also, both artists and scientists stress symmetry, concordance, rhythm and focusing on key points.

“Artists are good at imagery thinking, while scientists are strong at logical thinking. For logical thinking, the conclusion should be deduced step by step to ensure its correctness. However, evidence may not be sufficient to prove a proposition in the initial stages of innovative research. Scientists will have to make assumptions first, and then look for evidence. In the process of making assumptions, they need to resort to non-linear thinking, which is actually what artists are good at,” Academician Pan explained.

On the other hand, artists need help from scientists, he said. New materials, 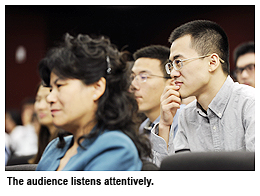 tools and technologies for art are provided by scientists. One good example is the development of movie production and photography. A lot of movies today make use of new technologies such as optical motion capture. Also, the invention of advanced equipment and computer technology made it much easier for us to create artworks, he pointed out.
Traditional art could also benefit from scientific advancement, he continued. For example, using advanced materials can produce high-quality Chinese ink brushes. “Ink brushes are now seldom made purely of animal hair but are mixed with artificial fibres to produce brush tips with appropriate flexibility, thanks to inventions by materials scientists. At the same time, hi-tech products can be enhanced by art. iPhones are an excellent example of a successful marriage between art and science that has helped this Apple product become so popular around the world,” Academician Pan said. 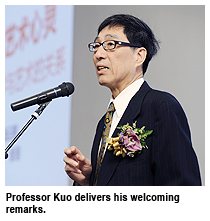 In his welcoming remarks, Professor Way Kuo, CityU President, thanked Academician Pan and other members of the CAE for visiting CityU. “Today’s society needs talented people who have the attributes of reasoning and an artistic mind. CityU’s Run Run Shaw Creative Media Centre represents a perfect integration of art and science. We are honoured to have Academician Pan, who is a renowned scientist as well as an outstanding calligrapher, to host a talk at CityU. His inspiring ideas will offer us a deep understanding of the significance of integrating reasoning and artistic mind.”
Academician Pan graduated from the Department of Architecture at Shanghai Tongji University in 1970 and received his master’s degree in computer science from Zhejiang University in 1981. He served as the President of Zhejiang University and is currently the Executive Vice-President of the CAE, a Member of the Academic Degrees Committee of the State Council in China, and an Honorary Director of the China Society of Image and Graphics. He has long been engaged in the study of computer graphics, computer-aided design (CAD) technology, artificial intelligence (AI) and industrial design. He is also a pioneer in the fields of AI CAD and computer art in China.