The Third Standing Committee of City University of Hong Kong (CityU) Convocation pledged to build stronger ties with alumni and the University at its inauguration ceremony on 15 February. 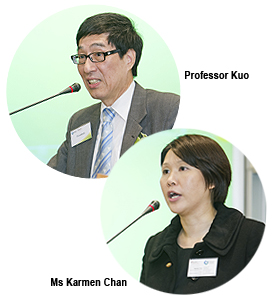 Speaking at the event, Professor Way Kuo, University President, expressed his deepest gratitude to the Convocation. “I would like to thank the Convocation for connecting the University with alumni and contributing to our development, especially helping us to promote environmental concerns,” Professor Kuo said.

In his remarks, Professor Kuo said students are the most important element at the University. He also highlighted current campus developments, including the current status of Academic 2, Academic 3 and the student hostels. 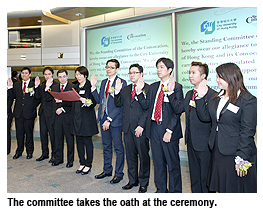 The re-elected Chairman of the Third Convocation, Ms Karmen Chan Ka-man, and the other members of the team, comprising a good mix of new blood and re-elected members, pledged to bind alumni in support of the university’s development and serve the community with sincerity, integrity and commitment.

Members of the Third Standing Committee later put their wishes in a heart-shaped time-capsule, signifying their dedication and commitment.

Ms Chan thanked the provisional committee and former standing committees for laying a strong foundation. “Thanks for the trust and support, and the advice and opinions from our fellow alumni. I will embrace diversity among our alumni, uniting them to support the University,” she said. 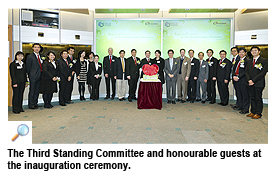 The establishment of the Convocation as a statutory organisation by the Council on 1 January 2007 marked an important milestone in CityU’s history, creating a significant link between the University and its growing band of alumni.

Membership List of the Third Standing Committee of the CityU Convocation