Ceremonies were held on 6 January to welcome the fourth batch of Chinese judges taking the Master of Laws (LLM) programme and to congratulate the third batch that has just completed the one-year programme at City University of Hong Kong (CityU). 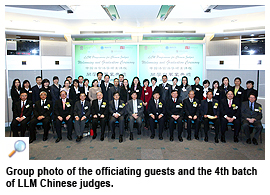 The fourth batch of students, comprising 28 judges from 15 provinces on the mainland, will join the common law stream of the LLM programme offered by SLW. During their studies, the judges will spend a month at Columbia Law School, visit Korea University in South Korea, and conduct a study tour to Geneva and Vienna.

SLW has run the LLM programme for Chinese Judges for the last three years during which time the participants have benefitted from SLW’s extensive global links with world-renowned universities and legal institutions. In addition to a tailor-made course at Columbia Law School, SLW arranged a series of visits to law enforcement and judicial organisations around the world. 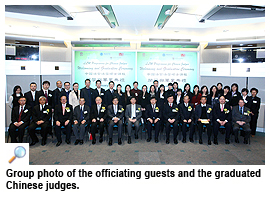 In July 2011, the third batch of participants had the opportunity to observe a trial by the nine justices of the Supreme Court of the United States in Washington D.C. In South Korea, the judges attended a course on the Korean legal system organised by Korea University and visited the local judiciary, including the National Assembly of the Republic of Korea, the Korea Constitutional Court, and the Korea Judiciary Research and Training Institution.

In December, the judges visited the World Trade Organisation, the World Intellectual Property Organisation, the United Nations Conference on Trade and Development, and Geneva University where they had comprehensive discussions with specialists on issues including commodities and service international trade, plus international intellectual property protection. The judges then visited the Austrian Supreme Court and attended talks by professors from the Faculty of Law at the University of Vienna.

The LLM programme provides an unrivaled platform for Chinese judges to exchange and learn from their counterparts around the world, a process that contributes to the openness and transparency of the legal system in China.