The emergence of China as an international power, especially in trade and commerce, means there is an increasing demand for Chinese judicial professionals who have a global perspective and a considerable understanding of key international legal issues. The School of Law (SLW) at City University of Hong Kong (CityU) is honoured to offer its Master of Laws (LLM) Programme for Chinese Judges for a third consecutive academic year. Today marks a historic day for LLM, as the second batch of judges is graduating, and a third batch is welcomed onto the programme. 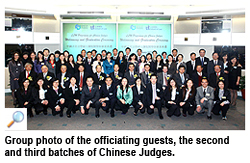 Following the success of the first LLM programme, SLW has enriched the global elements of the programme by providing diverse overseas learning opportunities. In addition to a one-month legal course at Columbia Law School, SLW arranges for the Chinese judges to visit law enforcement and judicial organisations abroad. These learning experiences have enhanced the understanding of the Chinese judges to common law practices in Hong Kong and other countries, and exposed them to key international legal concepts.

Fourteen students from the second LLM programme attended two lectures given by World Intellectual Property Organization (WIPO) officers and visited the United Nations Institute for Training and Research (UNITAR) in Geneva, Switzerland. During the visit to WIPO, the judges gained an understanding of the practice of WIPO’s Alternative Dispute Resolution systems and China's practice in international IP protection and dispute settlements. The judges also learnt more about the functions and projects of the United Nations Conference on Trade and Development. 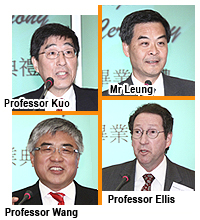 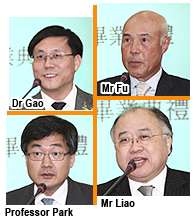 Mr Leung said, “We pay equal emphasis in the pursuit of social justice in spite of the difference in judiciary and legal systems in mainland China and Hong Kong. Our legal system is the last defence in social justice. To take a step further, it is also the pillar for a harmonious society. CityU considers highly of the LLM programme which is contributive to the progress and development of China’s legal system.”

“China is playing an important role internationally with its economic growth. Demand for legal professionals who understand both the Chinese legal system and the common law system grows in China with the increasing interaction between China and the rest of the world. CityU is proud to have served as a platform for three consecutive years for such legal education exchanges,” said Professor Kuo.

Justice Wan said, “Two batches of students have completed the LLM programme so far. The experience has had a positive impact on their work and respective work units. The programme has proved to be successful, paving the way for establishing a sound understanding of legal knowledge in the UK, US and France and enriching the students’ experience of judicial trials in other countries. I believe the programme will surely become an important topic in the judicial exchange between the mainland and Hong Kong. This programme is fully acknowledged by the Supreme People’s Court of China.” 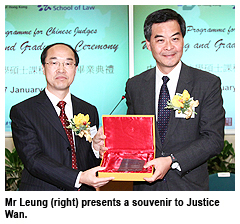 Professor Wang said, “The launching of the LLM programme for the third batch of Chinese judges demonstrates that there is much room for cooperation and development over legal education between the mainland and Hong Kong. The School is honoured to be part of this process. The LLM programme for the Chinese judges is tailor-made in which the judges will not only study in Hong Kong but also at Columbia Law School, the United States and Korea University Law School. They will also have opportunities to visit the local judiciaries and exchange views with the local judges in both the United States and Korea. The programme aims to enrich their experience and comprehend the knowledge and practice of common law in other countries and regions, so that they will be able to better perform their duties in foreign-related cases against the trend of globalisation.”

Yi Xiaohui, a graduate representative of the second batch of LLM judge students, said, “In a nutshell, principles and precedents of Common Law give us more ideas on legal justification and discretion for justice, fairness and reasonableness. To take a step further, we know what an administrative-led government and balanced participation meant in HKSAR; and also how a free and vigorous economy of a society is maintained. We also understand that in any society, justice and efficiency are essential to maintain an effective legal system.

Liu Yanxiao, the incoming LLM judge student representative, said, “I would like to thank CityU for providing us with a great platform for learning and communication. After Hong Kong’s handover to China, the judicial concepts and beliefs that Hong Kong has always been adopting have exerted far-reaching influence over the mainland. The forthcoming year of study and several overseas inspection trips will surely expand our horizon and help develop our understanding towards the legal system in Hong Kong and other countries. The understanding serves to provide us with a solid foundation to handle the upcoming foreign-related cases in the future. We will cherish this opportunity and make full use of the available resources provided by CityU and other organisations, striving our best to achieve the best possible results.”

The pioneering LLM programme is customised under a tripartite arrangement between SLW, the National Judges College of the Supreme People’s Court of China and Columbia Law School, US. The programme aims to promote legal education between Hong Kong and mainland China, and widen the exposure of Chinese judges to international legal information, enabling them to deal better with foreign-related cases.