In front of a packed audience at Diocesan Boys’ School (DBS), the President of City University of Hong Kong (CityU) stressed that success in one’s professional life depended on attitude, diligence and a passion for your studies, not just on a degree from a high-status university. 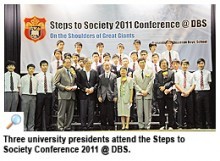 Professor Way Kuo was one of two heads of local universities invited to the Steps to Society Conference 2011@ DBS on the topic “On the Shoulders of Great Giants” on 29 June. The other was Professor Tsui Lap-chee, Vice Chancellor of the University of Hong Kong. In addition, Professor Charles K Kao, the winner of the 2009 Nobel Prize for Physics and former Vice-Chancellor of the Chinese University of Hong Kong, presented prizes to scholars in science, music and sports at the conference.

Professor Kuo’s speech was entitled “Life beyond a degree”. After congratulating the audience for attending a prestigious school such as Diocesan Boys’ School and possible enrollment into prominent universities, Professor Kuo cautioned that a good degree from a well-known institution did not necessarily guarantee a successful career.

Life beyond a degree

“While it is true that many successful people go to respected universities and the education they receive certainly helps them in their careers, a good degree from a well-known school or higher education institution is not a free pass,” he said. “Students who studied extremely well in high school did not necessarily excel in college. Also, the best students in college, upon graduation, were not automatically successful as graduate students or the most competent when they entered the job market.”

He went on to explain the nature of a degree. “A degree is a qualifier. It shows on paper that you have reached a certain level of academic endeavour. But it does not ensure a good job, a high salary, happiness or contentment in life. A degree gets you a job interview; it does not get you the job,” he said.

Do what you love, love what you do

Both presidents believed that a desire to learn and a passion for what one does will lead to greater rewards for oneself and society as a whole.

“A degree is not the last word in career success and life satisfaction,” Professor Kuo said. “To succeed, you need to possess three major attributes: discipline, passion and perseverance.” He elaborated the point using IT gurus such as Bill Gates of Microsoft and Mark Zuckerberg of Facebook as examples. Both dropped out of Harvard not because they didn’t want to learn but because the passion to pursue their entrepreneurial spirit inspired them to create incredible business ideas that have benefited people all over the world, he said.

Professor Kuo shared his personal experience with the students, too. “When I started my career in engineering, I was lucky. I loved my field of study. I loved teaching and I loved research. You will find that many people who reach the top of their profession have a similar experience. We do what we love most!” he said.

He believed he made the right decision by choosing the quality of the faculty in his target department rather than the status of the university when he was a student. “I had a great role model. For instance, I learned from my advisor how to judge a good paper. This is a skill that has helped me enormously as the editor-in-chief of the academic journal IEEE Transactions on Reliability,” he added.

Professor Kuo concluded his talk saying: “Each one of us has a dream. Through your studies and in your career, you can explore and uphold what you cherish the most, on a journey that will lead to greater rewards for you and society as a whole. You don’t necessarily need a degree from one of the most prestigious universities in the world. What you need above all is a desire to learn and a passion for what you do. That is the secret to success.”