One of China’s pre-eminent historians unpicked the ideological, academic and cultural influences of a crucial date in China’s modern history at a talk for the CityU Distinguished Lecture Series on 22 June at City University of Hong Kong (CityU). 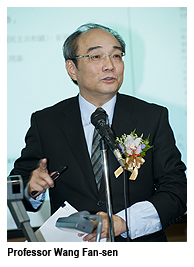 To commemorate the 100th anniversary of the 1911 Revolution, Professor Wang Fan-sen, Vice President of Academia Sinica, explained the unique features of a dramatic uprising that changed the course of China’s history.

“China was ruled by different imperial families for more than 2,000 years, but opposition forces were virtually unheard of until the 1911 revolution. To ordinary citizens, emperors represented the political, religious and moral centre,” said Professor Wang, adding that these thoughts have been frequently found in Chinese novels and dramas.

“The sudden collapse of the 2,000-year imperial system in 1911 reached far beyond the political arena. As an interface of society, a political system can have a huge impact on culture and thought,” he added. His talk was titled “Power of Ideas: Some Intellectual Consequences of 1911 Revolution”.

Elected a fellow of Academia Sinica in 2004, Professor Wang has studied Chinese intellectual and cultural development that occurred during the Ming and Qing dynasties (1368-1911) and more contemporary times.

Professor Wang said the concept of “Power of Ideas” in the title of his talk stemmed from articles written by the scholar Liang Qichao. He argued that ideology played a highly influential role at key moments in history and that timing was crucial, too. 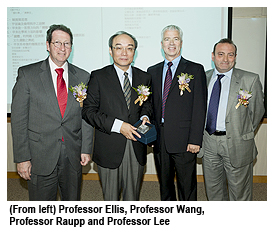 “Books that influenced the revolution such as Yangzhou Massacre and Massacre of Jiading City were published a long time before 1911 but they did not help instigate uprisings against the Qing Dynasty,” he said.

“The revolution could not take place until the kingdom had become so weak that people feared they would be ruled by foreigners if there was no change to the status quo. In such a tense political climate, the revolutionary thoughts espoused in those books lit up a warehouse full of explosives,” he added.

The success of the 1911 revolution removed forever certain pillars that had supported traditional culture and thought for hundreds of years such as the imperial examination whose demise completely changed the way for ordinary people to join the social elite. As renowned scholar Hu Shih said, the campaign for promoting the use of vernacular Chinese would have failed if the imperial examination had not been abolished. In addition, the newly established Nanjing government introduced more than 30 policies for founding a modern society. These replaced the previous culture of promoting mere propaganda and were implemented across the whole country. For instance, students were no longer required to memorise the Chinese classics or study Confucian thought.

“After that, the basis of traditional culture no longer existed,” Professor Wang said.

Professor Wang described the 1911 revolution as the “track changer for new thought”. It led to the collapse of old ways of thinking about cosmology and moral principles. Although traditional thoughts and values had not disappeared, their prevailing status diminished. 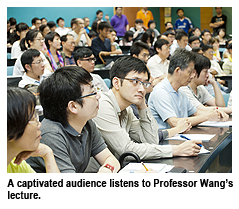 Unlike other major incidents of civil upheaval in the US, England and Japan, for example, the 1911 revolution not only led to the establishment of a new China (the first republican state in Asia), it also introduced a new cultural movement. It indeed deserved further studies, Professor Wang said.

Professor Arthur Ellis, Provost, and Professor Gregory Lee, Dean of the College of Liberal Arts and Social Sciences, made introductory remarks at the beginning of the lecture. Professor Gregory Raupp, Vice-President (Research and Technology) also attended.