The unique role culture plays in innovative product design was the topic of a lecture by Professor Pan Yunhe, Executive Vice-President of the Chinese Academy of Engineering and former President of Zhejiang University, at City University of Hong Kong (CityU) on 29 April. 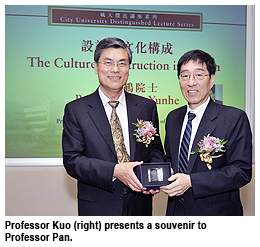 Part of the CityU Distinguished Lecture Series, Professor Pan’s talk, titled “The Culture Construction in Design”, attracted an audience of more than 150.

Professor Pan made it clear at the beginning of his talk that he would discuss the topic of design from a novel perspective. “In order to build an innovative country, we need to set up an innovative framework to accommodate all the elements. A good design is crucial to innovative product and engineering development,” Professor Pan said.

He added that the future direction of product design for the mainland is to integrate the elements of new technologies, environmental protection, public health, community services and Chinese culture, and incorporate them in new product and engineering design.

Professor Pan said cultural development has prevailed on the mainland since the beginning of the 21st century. This can be seen in the preservation of ancient buildings and villages as well as the heated enthusiasm in collecting Chinese antiques in the country. Outside China, Kungfu Panda became a Hollywood movie star and Chinese-style design has proved popular in the Parisian fashion sector.

These elements have helped contribute to a so-called cultural renaissance in mainland China, Professor Pan said, adding that he hoped Chinese designers can explore, apply, disseminate and develop Chinese culture. At the same time, they should understand, accept and integrate cultural elements from other countries, too.

Professor Way Kuo, CityU President, expressed thanks on behalf of the University to Professor Pan for his inspiring lecture. “Professor Pan has rightly pointed out that innovation can better be developed from a wide vision, and innovative ideas from a unique structure of knowledge. I deeply believe we will benefit a lot from Professor Pan’s lecture,” Professor Kuo said.

Professor Pan graduated from the Department of Architecture at Tongji University in 1970, and received his master’s degree in computer science from Zhejiang University in 1981. He has served as the Director of the Institute of Artificial Intelligence and the Director of the Institute of Modern Industrial Design. He is currently the Executive Vice-President of the Chinese Academy of Engineering, Chairman of the China Society of Image and Graphics, Chairman of the Industrial Design Institution of Chinese Mechanical Engineering Society, and a Member of the Academic Degrees Committee of the State Council in China.