When the pioneers of early cinema made their first films at the dawn of the last century, they could never in their wildest inventive imaginations have envisioned the multiplicity of cinematic forms that would flourish over the next few decades. 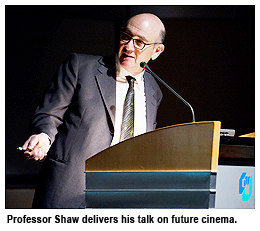 Professor Shaw, one of the world’s most influential new media artists and researchers, took the audience of students, staff and guests on a highly visual journey, from panoramic, immersive and interactive cinematic forms to mash-ups, augmented reality and recombinatory visions, in a talk titled “Future Cinema-creating new realities”.

The talk, part of the President’s Lecture Series: Excellence in Academia, explored how today’s diversity of cinematic media forms are capable of reconstructing space and time as an active participatory experience.

“The invention of the cinema clearly identified our fascination with technology as a means to embody a universal and timeless urge to create visions,” said Professor Shaw, who has spent his career creating and researching strategies of interactivity and virtuality that have explored the possibilities of new types of cinematic experience. 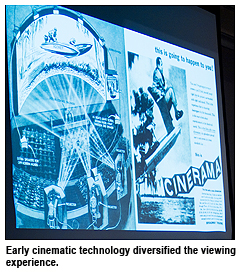 In his talk, Professor Shaw offered up examples of new pathways in cinema from his own art practices and those of his colleagues and other notable new media artists from the last 40 years. To illustrate what he meant by interactive cinema, for example, he showed a video clip of one of his early works, “Waterwalk” (1968), a three-metre high tetrahedron balloon placed on a lake and in which two people could, literally, walk on water.

In a later work, “Legible City” (1989), a visitor rides a stationary bike through a simulated urban landscape where the streets and buildings are formed using 3D computer-generated words and sentences. The rider navigates his or her way through the city by “reading”, creating a unique narrative as the journey progresses.

These and other examples taken from different thematic strands revealed the intricate inter-disciplinary artistic and technical features required to produce such installations. But, as Professor Christian Wagner of the Department of Information Systems pointed out in his introduction at the start of the lecture, Professor Shaw has never lost sight that “the art comes first”.

Hence we have beautifully conceived artistic and intellectual works such as “Heaven’s Gate” (1987) in which a mirror is placed on the ground and a film projected from the ceiling. The film oscillates between images of ornate Baroque ceilings in palatial surroundings, suggesting visions of heavenly skies, and satellite video taken of the Earth from space. When the viewers look down at the mirror, they see themselves against a backdrop of the projected celestial images.

One of the common motifs in the diverse themes presented in the talk was the notion of viewer control and presence Whereas most commercial motion pictures from mainstream studios feed the narrative to a passive audience, many of the cinematic forms presented by Professor Shaw elevate the role of the viewer, allowing him or her to direct, participate in and edit the work in real time.

For Professor Shaw, the range of possibilities presented by cinema is what makes this art form so special, especially for students today.

“There is a cornucopia of opportunities for students and enormous room for invention,” he said.

People have found in cinema an extraordinarily powerful medium for conveying the thoughts they wish to express, and the cinema of tomorrow presents an array of pathways for the viewer to anticipate, Professor Shaw said.

From vision to immunology via mathematics