From vision to immunology via mathematics

It was a moment that perfectly captured the nature of the problem. After writing up a series of algorithms for the benefit of the audience, the speaker offered this thought. 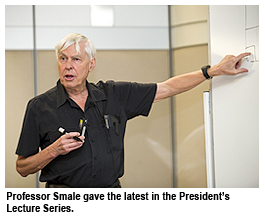 “So easy to write down, but so difficult to understand,” said Professor Stephen Smale, University Distinguished Professor at City University of Hong Kong (CityU).

During his fascinating talk, Professor Smale presented his current research on design issues related to peptides—natural or synthetic compounds containing two or more amino acids—in the fight against diseases such as cancer and HIV.

“A peptide is a fragment of a protein molecule,” said Professor Smale, one of only twelve mathematicians in history to win both the Fields Medal and the Wolf Prize in mathematics. “Appropriately chosen, its binding to a certain cell in the human body triggers a response which can destroy a toxic agent as a virus, bacteria, or cancer cell.”

A modern goal of immunology is to design peptides to fight diseases such as HIV and cancer, he explained to the 200-strong audience, many of whom were students. Under the unifying power of scientific computation, Professor Smale and his core group have established algorithms that can predict peptide binding with what appears to be a high level of accuracy.

He referenced theories of the visual cortex and the text classification process used in search engines such as Google to explain the hierarchy and organisational process used to formulate the algorithms.

The ultimate goal is to provide immunologists with a better understanding of the potential peptides have in combating disease. The challenge now, he said, is to understand why and how the algorithms that he and his core group have developed have proven so accurate to date. 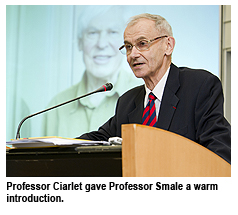 Professor Philippe Ciarlet, Chair Professor of Mathematics, introduced Professor Smale, relating how he joined CityU in 1995 after three decades teaching and researching at UC Berkeley, US.

He said Professor Smale obtained his PhD in 1957 at the University of Michigan and the next year astounded the mathematical world with a proof of a sphere eversion. That is, he proved that a sphere can be turned inside out, without any tears, if the surface of the sphere is allowed to intersect itself.

The audience also learned that Professor Smale has one of the finest private collections of crystals in the world and is an experienced, ocean-going yachtsman. He left in 2002 to take up a position at the Toyota Technological Institute, Chicago, and returned in the summer of 2009 to continue his ground-breaking work.

The lecture, “From Vision to Immunology via Mathematics,” was the fourth in a series of specially commissioned lectures at CityU celebrating the work of our top academics. The talks are an initiative of Professor Way Kuo, our President, and are named “The President’s Lecture Series: Excellence in Academia”.

The next talk will be given by Professor Jeffrey Shaw, Chair Professor of Media Art and Dean of the School of Creative Media. The title is “Future Cinema—Creating New Realities”.