The President of City University of Hong Kong (CityU) addressed some of the major reliability challenges facing the use of nano-technologies in today’s high-tech and consumer-led industries at a special lecture on 4 March.

Professor Way Kuo, a Foreign Member of the Chinese Academy of Engineering, and a Member of Academia 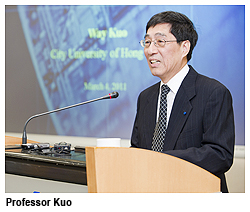 Sinica, Taiwan, and the US National Academy of Engineering, began by pointing out that the use of nano and bio devices, sensors and other similar products is rising because of the proliferation of technology-based products such as iPhones, PDAs, HDTV, TFT-LCD, hybrid automobiles, new aircraft, and medical instruments.

"However, we do not have a great deal of information about the useful life of these sophisticated products even though they are flooding the market,” said Professor Kuo, whose talk was part of The President’s Lecture Series: Excellence in Academia, which he initiated last year.

To ensure safety, it is necessary to study ways to analyse these systems and incorporate reliability in products and processes,” he said. He also pointed out that keeping things “simple and compatible” is essential to maintaining the reliability of modern systems. The nano products are a driving force of technological and social change in the 21st century. 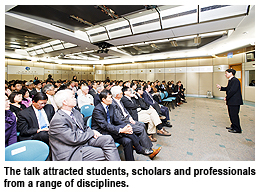 The major issue, according to Professor Kuo, was the extent to which industry is ready to deal with the reliability and security questions in the use of nano devices-based systems, which are key concerns of our society.

In front of a packed auditorium of CityU scholars, students and invited guests, Professor Kuo, the editor-in-chief of IEEE Transactions on Reliability, outlined four principal challenges.

The first dealt with the necessity of identifying and establishing mechanisms for assessing failure. He stressed the problems involved in trying to assess how long a new device, whether it is an iPad or a Kindle, will last before it breaks down or encounters any number of mechanism problems. With new devices hitting markets so quickly, it is a challenge to assess actual life-cycle.

The second challenge focused on yield, as nano-technologies tend to have a lower production rate than their larger counterparts and are also relatively much more expensive considering that a device’s lifetime is uncertain.

Given the fact that nano-technologies are comparatively new, the third challenge acknowledged is a scarcity of information, raising issues of data interpretation. 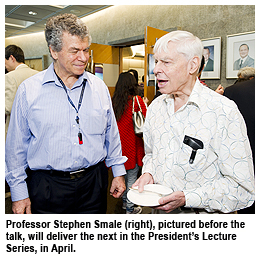 Perhaps the challenge most readily appreciable by the general public was the need for researchers in reliability to keep up with the swiftness with which technology is evolving. Breakthroughs in various aspects of nano-technology lead quickly to new paradigms and issues of understanding, resulting in research that tends to be hypothesis- rather than problem-driven, with obvious consequences for the practicality of industrial production and, eventually, consumer satisfaction.

Looking to the future, Professor Kuo said that the fast pace of the technological evolution taking place around us will be further ignited by the development of new materials and faster functions on new circuit designs. These advances will add to the complexity of reliability issues in the years to come.

The President’s Lecture Series promotes cross-disciplinarity by offering a space for distinguished CityU scholars to share their ideas and discoveries with academics from other fields, a process aimed at invigorating the research landscape on campus.

In addition, the series enriches the educational experience of our students by introducing them to fresh ideas and new concepts from a broad range of disciplines.