The opening ceremony of the 3rd Advanced Programme for Chinese Senior Judges at City University of Hong Kong (CityU) on 11 April celebrated a milestone in legal education for Chinese judges.

The programme, jointly provided by the School of Law (SLW) and the National Judges College of the Supreme People’s Court of the People’s Republic of China for the past three consecutive years, is the first and only legal education programme for mainland senior judges in Hong Kong. 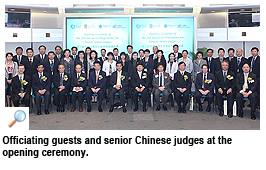 The participants will attend intensive courses on common and international law, and visit Hong Kong’s judicial organs and other institutions.

The officiating guests at the opening were:

· Mr Zhan Yongxin, Deputy Commissioner, Office of the Commissioner of the Ministry of Foreign Affairs, People's Republic Of China, HKSAR

Mr Leung said, “As the mainland and Hong Kong have different judicial and legal systems, it is essential to enhance the mutual understanding of the laws of the two jurisdictions by facilitating the exchange of judicial personnel. As in the past few years, CityU again provides a platform for in-depth understanding of common law and international laws via the Advanced Programme for Mainland Senior Judges. It is our honour to be able to make this humble contribution to the judicial and legal developments on the mainland.”

Professor Kuo said, “Burgeoning commercial relationships between mainland China and the globalised world have prompted the need for enhanced cross-border judicial communications. In response, City University of Hong Kong provides intensive courses in both Chinese law and international law through the Advanced Programme for Chinese Senior Judges. Now in its third year, the programme also contributes to the general cultural development of China.”

Mr Hao said, “Continuous education for Chinese judges is one of the essential elements in developing knowledge-based courts. Being the highest training centre for Chinese judges, the National Judges College has been devoted to providing a bigger, higher and broader platform for Chinese senior judges in adjusting ideology and updating knowledge and enhancing ability. The Advanced Programme for Chinese Senior Judges organised by the National Judges College and City University of Hong Kong is a vivid example of the platform we need. It is also the result of our innovative methods.”

Professor Wang said, “The SLW has established a close relationship with the National Judges College and there are no difficulties in communications and cooperation. I believe the programme will be more outstanding in the future.”

Mr Xu Chunjian, Representative of the 3rd Advanced Programme for Chinese Senior Judges and Vice-president of Guangdong High People’s Court, said, “I sincerely thank the National Judges College and CityU for giving us the opportunity on behalf of the entire students. Since the reversion of Hong Kong to China in 1997, the judiciary system successfully realises the “One-country, Two-system”. A fine judiciary system is a foundation to sustain the stability of Hong Kong society, stabilise economic development, and help people live in peace and enjoy their work. In terms of judiciary system establishment, there is much for Hong Kong and China to discuss. The course offers judges, who are responsible for settling mainland issues involving Hong Kong and foreign-related civil and business cases, an opportunity to learn about the Hong Kong judiciary system and common law. It also provides a platform for legal professionals in both places to exchange opinions.”