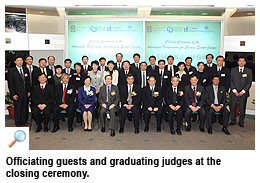 The programme was organised by the CityU School of Law in collaboration with the National Judges College of the Supreme People’s Court of China. Held twice a year, the programme is an intensive course customised to give Chinese judges a profound understanding of the common law system and other international legal concepts.

The 34 senior judges came from 27 provinces and cities in mainland China and were nominated to participate in the programme from 8 January to 29 January in Hong Kong. They met with the Hon Chief Justice Andrew Li Kwok-nang and visited the High Court, Department of Justice, Legal Aid Department, ICAC, Office of the Ombudsman, Office of the Privacy Commissioner for Personal Data, Hong Kong Exchanges and Clearing, the Hong Kong Bar Association and the Law Society of Hong Kong. They also attended the ceremonial opening of Legal Year 2010. It is a unique experience for the judges to exchange views with judicial personnel in Hong Kong. 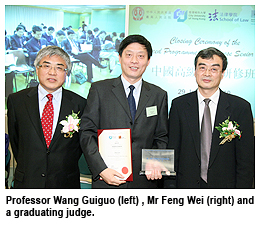 Professor Wang Guiguo, Dean of School of Law, presented the graduation certificates to each of the judges during the closing ceremony. Mr Tian Chengyou, Vice President of Yunnan Province Higher People’s Court, was nominated by his class peers to deliver closing remarks on behalf of all programme participants.

Professor Wang was proud of the success of the legal programme. “The programme is unique as it combines classroom lectures with visits to judicial institutions and law enforcement agencies. We are grateful to the Philip K H Wong Foundation and Philip K H Wong, Kennedy Y H Wong & Co for contributions that made the programme possible.”

Aimed at widening the exposure of senior Chinese judges, the programme not only created a forum for legal exchange between two jurisdictions, it brought together senior judicial personnel from different mainland provinces and cities to Hong Kong to interact with each other.