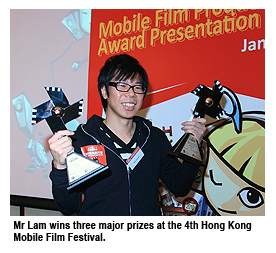 Mr Lam Chi-chung, a 2010 graduate from the School of Creative Media, won the prizes with his film The Launch, which was the final-year project for his Bachelor of Arts (Hons) in Creative Media. The project took about ten months to complete, from developing the story and drawing the actual characters to sequencing the scenes.

In his film, Mr Lam emphasises the importance of cherishing our surroundings. The film depicts how one day a boy removes a component from his loyal robot dog in order to help repair a space rocket. But his plan goes terribly wrong because he can’t get his robot dog or the rocket to move ever again.

Mr Lam developed a keen interest in animation from a young age. As a child he used to draw characters from cartoons he saw on the TV, and at secondary school he started to use animation software. Computer graphics as a programme of study was becoming a trend when he was deciding what to study at university, and so he opted for the creative media programme at CityU, the only institution in Hong Kong to offer such a degree at that time. An animation major, he now works for a post-production film company.

With no expectations to win anything at the festival, Mr Lam said his three awards have been a tremendous boost.

“I wish to thank the School of Creative Media for providing me with such an excellent learning environment. Also, I would like to express my gratitude to Mr Julius Wong Chin-pang, the supervisor of my final-year project, and the other teachers at the School for their valuable advice,” Mr Lam added.

Organised by the Hong Kong Wireless Technology Industry Association and the Hong Kong Productivity Council, the festival aims to promote the creativity of and public interest in mobile films in Hong Kong and introduce local talent to other countries.

After the presentation ceremony on 26 January, The Launch and other winning works will represent Hong Kong in competition with entries from nine other countries, including Australia, France and Germany, at the Hong Kong International Mobile Film Awards in March.