A distinguished engineer from City University of Hong Kong (CityU) has been awarded one of the most significant prizes in electronics and information technology in mainland China. 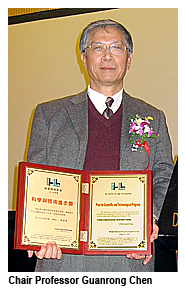 Professor Guanrong Chen, Chair Professor in the Department of Electronic Engineering at CityU, won the 2010 Prize for Scientific and Technological Progress in the category of electronics and information technology by the Ho Leung Ho Lee (HLHL) Foundation. The prize honours Professor Chen’s research into nonlinear systems control and dynamics, a key area in engineering today. His research applies to related areas such as encryption and secure communications, nonlinear vibrations analysis and control, and chaotic signal generators design, among others.

“I feel truly honoured and humbled to be put in the same league as those who have dedicated their lives to science and technology in China. Special thanks go to those who worked tirelessly with me over the past decade to help gain this recognition,” said Professor Chen, the founding director of the Centre for Chaos and Complex Networks at CityU.

“I am also indebted to the Centre, the Department and the University for opportunities and supports to research on chaos theory and its applications,” he added.

Professor Chen has worked for many years on the theory and applications of nonlinear dynamics and control, and complex dynamical networks. He is acknowledged by the international academic community as the pioneer of chaos control and anti-control theory.

“I sincerely hope that in the coming years there will be further fundamental applied research on emerging and cutting-edge chaos control and synchronisation technology as well as complex dynamical networks,” Professor Chen said in his New Year wish.

Chaos theory studies the essence of order within disorder. It concerns discovering the underlying order within apparently random data and irregular dynamics, because a tiny change in the initial condition of a chaotic system can have a tremendous dynamical consequence. The world weather and stock market are two typical examples of this kind. Professor Chen has spent years researching ways to weaken or eliminate harmful chaotic dynamics, and create or enhance useful chaos.

The chaotic system founded by Professor Chen in 1999 was named the Chen System by fellow researchers worldwide. His published work has accumulated more than ten thousands of citations and he was classified as a “Highly Cited Researcher” in Engineering by the Thomson Reuters Institute for Scientific Information.

Professor Chen was elected IEEE Fellow in 1996 for his contributions to the theory and applications of chaos control and bifurcation analysis. He has received numerous prestigious awards, including the second-class State Natural Science Award in 2008 for a project under his leadership called “Chaos Anti-control and Generalized Lorenz Systems Family—Theory and Applications” while no first-class award was doled out in that year.