Professor Chen Guanrong, Chair Professor of Electronic Engineering at City University of Hong Kong (CityU), was conferred a second-class award under the State Natural Science Award (SNSA) in recognition of his achievements and contributions in the field of chaos theory. 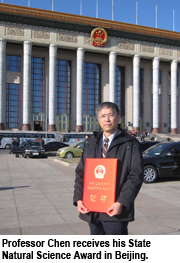 Professor Chen has been engaged in the research of chaos theory for the past 20 years and is renowned for his discovery of the “Chen System” - a reputed chaos system well known to the international academic community. He is also active in promoting related research among scientists and researchers both at home and abroad.

The SNSA, China’s most prestigious award in the field of natural science, recognises academic excellence in basic and applied research in the nation. More than 160 shortlisted projects competed for the award in 2008 and no first-class award was given this year.

Chaos theory seeks to uncover underlying order within apparently disordered dynamics and data. It is a relatively new discipline, in existence for 40 years or so, but is fast gaining recognition of significance and importance in academic communities. Many scientists rank chaos theory with relativity and quantum mechanics as among the three most important scientific theories of the 20th century.

The award-winning project led by Professor Chen, “Chaos Anti-control and Generalised Lorenz Systems Family - Theory and Applications”, belongs to the frontier of interdisciplinary scientific research on chaos theory, control systems and mathematical sciences. Its findings provide some new theories and technologies for the application of chaos theory in engineering, physics and biology alike, for example in network security. Based on chaos theory, Professor Chen has developed a methodology for designing secure communication systems. Under his framework, information is transmitted in a chaotic form, thus ensuring the security of data. What’s more, the technology is easy to apply, faster and cost-effective. 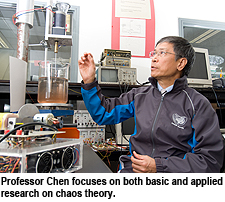 The chaotic system founded by Professor Chen in 1999 enjoyed great popularity in the international scholarly world and was named the “Chen System” by fellow researchers. There were several thousand citations on the system, and more than 100 research papers have the name “Chen System” in their article titles.

Professor Chen’s main research pursuit is in one of the focusing areas of engineering. While enhancing the quality of basic research, he also applies his research to related areas such as complex networks, information encryption and secure communications, non-linear vibration analysis and control. He has also introduced this frontier scientific subject to mainland China and initiated related research conducted by many younger scientists.

Professor Chen was pleased to receive the award and regarded this as the nation’s affirmation of his achievements in scientific research, and expressed his gratitude to CityU for its strong support over the years. He was particularly gratified his success spurred an impetus to the development of this discipline in mainland China.

“The fact we achieved such great scientific results under not so well-prepared conditions will serve as an impetus to students and young researchers. I hope we’ll be able to make greater contributions to our country in this respect,” Professor Chen said.

He added there is great potential in further developing the chaos theory, given that it spans many disciplines, including mathematics, physics, engineering, technology, biology, chemistry and even social sciences. Right now some scientists are doing research on how to use chaos theory to explain the processes behind human thought, memory and other cognitive behaviours.