The Court of City University of Hong Kong (CityU) was updated on the latest progress of the University and briefed on key initiatives concerning academic developments, governance issues and fundraising at its 4th meeting on 7 December.

In addition to its advisory role, one of the Court’s key functions is to engage eminent community leaders to fortify networks, raise funds and promote CityU, creating an important platform to rally supporters and friends for support and advice on the University’s development. 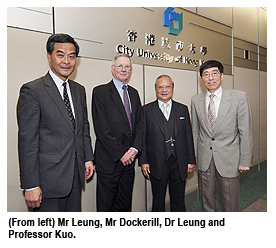 Dr Norman Leung Nai-pang, Pro-Chancellor, pointed out in his opening remarks that the Court has grown even stronger this year, welcoming 10 new members appointed under a new membership category.

"All 10 are eminent business and social leaders, friends of CityU who staunchly supported the University in the past," he said.

The Court, the supreme advisory body of CityU, was formally established in 2007 and has been operational since. It is one of three statutory bodies, together with the Council and the Senate, and established under the CityU Ordinance. 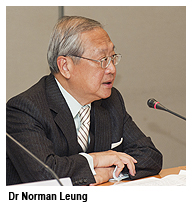 In his briefing to the Court, Dr Leung pointed out that the quality of education at CityU continues to receive international recognition. In 2010, CityU was ranked 15th among the top Asian universities, according to the QS (Quacquarelli Symonds) Asian University Rankings.

He added that CityU first broke into the world top 200 universities in 2004 ranked 198th, and was ranked 124th by the Times Higher Education Supplement’s World University Rankings in 2009, representing a significant rise in just five years.

Dr Leung also noted that the University Council has approved the Strategic Plan for 2010 to 2015. The plan provides a roadmap for the University to achieve its objective—excellence in research and professional education—over the next five years.

In his report to the Court, The Hon Leung Chun-ying, Council Chairman, highlighted the substantial efforts that the Council devoted last year in addressing human resources policy and staffing related issues since the University relied heavily on recruiting and retaining high caliber talents in achieving its objectives. Major issues reviewed included revising the outside practice policy and regulations, introducing Performance-based Pay Review Schemes, reviewing policies and systems for the renewal of staff contracts and establishing grievance procedures.

Mr Leung also mentioned that a Social Responsibility Committee has been set up under the Council to promote social responsibility concepts among students and staff. CityU is among a handful of universities in the world to have a standing committee at Council-level dedicated to this area, he said.

Mr Leung added that one of the recent endeavours of the Social Responsibility Committee has been to arouse awareness among the University community on the need to reduce food waste at source and how to manage the food waste generated in a responsible manner. The University is studying how to deploy technologies and engage students and staff in the move to achieve a “zero output of food waste” on campus, he said. 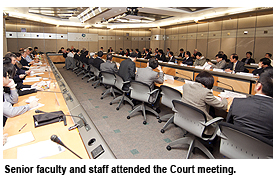 In his report to the Court, Professor Way Kuo, CityU President, highlighted new developments in relation to the new 4-year curriculum, fund-raising results and new plans to strengthen academic links and collaboration in mainland China. A white paper outlining the University’s initiatives in mainland China will be issued in the near future.

To prepare for the launch of the new 4-year curriculum, Professor Kuo said the University was delighted to have a new provost, Professor Arthur Ellis who will bring his substantial experience to the development and support of the undergraduate curriculum. Several new building projects to provide more teaching and learning facilities and student hostels are now under construction, he said.

Professor Kuo also announced news that CityU has raised a record of $160 million in donations this year. “This is the largest amount this University has ever raised,” he told Court members.

Before concluding the meeting, Dr Leung thanked Mr John Dockerill, Secretary to Council and Secretary to the Court, on behalf of the Court for his support and contribution during his 27 years’ distinguished service at the University. Mr Dockerill will retire at the end of December.