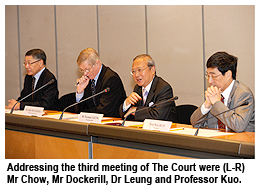 Dr Norman Leung Nai-pang, Pro-Chancellor of CityU, presided over the third meeting of The Court on 8 December. In his opening remarks, he pointed out that promoting the interests of CityU was undoubtedly the most important function of The Court. “This year has been particularly memorable as the University has celebrated its 25th anniversary,” Dr Leung said. “I recall that nine or ten years ago we at CityU aspired to be one of the top 200 universities in the world. We have in a relatively short time span exceeded these expectations to be ranked 124th according to The Times Higher Education Supplement’s World University Rankings in 2009,” he said.

In his report to The Court, Professor Way Kuo, President, spoke of CityU’s commitment to excellence, both in terms of its faculty and programmes. He also praised the success of the Silver Jubilee events, including the academician conferences, Student Leadership Conference, the Ocean Park night, the recent Anniversary Banquet and the upcoming One Health International Workshop, a key event being held on 10 December. “These activities successfully drew our stakeholders together.” he stated. Professor Kuo also highlighted the landmark inauguration this year of the School of Energy and Environment and the important place it will hold in this field throughout the region.

The Treasurer, Mr Vincent Chow Wing-shing, delivered the Report from the Council on behalf of the Council Chairman, The Hon Leung Chun-ying, who was not able to attend the meeting. The Report provided an overview of the University’s progress in regard to the four key priority areas identified last year. They were: policy and regulations governing outside practice; the transition to the four-year undergraduate curriculum; the introduction of a new remuneration package for the faculty and an associated performance-based review system; and, the future of the Community College of City University (CCCU). 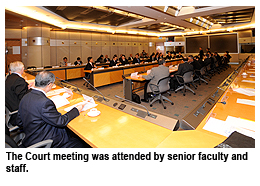 According to the Report, progress has been made in each of these areas. The University now has a draft of a new policy and regulation framework that will be implemented in the near future. A pilot scheme to identify any problems in the introduction of the four-year curriculum, and to subject them to stress tests, is due to be introduced in the 2010-11 academic year.

A new remuneration package has been approved by the Council, which will help in recruiting faculty of the highest calibre. The University is currently focusing on the future of CCCU, particularly in view of the introduction of the government policy to support the establishment of private universities.

A new five-year strategic plan for CityU was approved last month by the Council. The Report described it as “an ambitious one which reflects the dynamism and innovation of the University. Departments will now be asked to prepare detailed operational plans based on the goals and objectives in the strategic plan.” The Report also said that it would be “an opportunity for the University to identify niche areas to help Hong Kong industry and commerce to meet the challenges it will face as China’s economy grows and moves into areas which will compete directly with us.”

The Report emphasised that CityU education should inculcate in our students a strong sense of social awareness and engagement with the community. “We should also teach our students by example. We have started a programme to save water and energy and will do more. We have a minimum wage policy for cleaners and guards although they are not directly employed by us.” The Report concluded by highlighting that the University has put in more plans to build a common ethos among the University community of being socially responsible to both the environment and the under-privileged.

The Court is one of the three statutory bodies, together with the Council and the Senate, established under the CityU Ordinance, which is responsible for providing advice and support on the general policy and work of the University.

The Court briefed on new measures for strategic development