World civilisation scholars are congregating at City University of Hong Kong (CityU) from 29 November to 1 December to share views on how to develop a world civilisation course for CityU students. 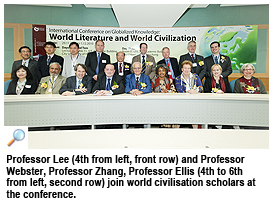 The three-day International Conference on Globalized Knowledge: World Literature and World Civilization has been organised by CityU’s Department of Chinese, Translation and Linguistics. Distinguished local and overseas scholars in literary studies are offering their insights into the study of world literature and exploring the theoretical, methodological and practical issues that will help envisage the course. 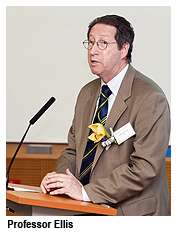 In his speech, Professor Ellis said that CityU is moving from a 3 to a 4-year undergraduate curriculum in 2012. “So it’s an opportunity to redesign our curriculum,” he said, adding that it is appropriate for CityU to focus on globalised knowledge, world literature and world civilisation because humanity lies at the core of CityU’s philosophy of discovery and innovation.

“The idea is that every undergraduate who comes here has the opportunity to create new knowledge and to protect the intellectual property involved,” he added.

The conference organiser, Professor Zhang, said the attending scholars are working on an ambitious project called “Literature: A World History”. The team has already outlined a plan on how to write a four-volume history of world literature, a timely and relevant endeavour, according to Professor Zhang.

“All major civilisations have great literary traditions and literature is one of the ways to express the spirit and existence of a particular culture,” he said.

CityU has invited seven renowned scholars in literary studies from the US, Europe, India and Lebanon to attend the conference this year, including Professor David Damrosch, Chair of Comparative Literature at Harvard University.

CityU has received funding from the Drs Richard Charles and Esther Yewpick Lee Charitable Foundation to explore ways of teaching world civilisation in the context of Hong Kong and mainland China. There are 13 presentations altogether during the conference and three general discussion sessions. More details can be found at http://istl.ctl.cityu.edu.hk.