The renowned computer expert Dr Lee Kai-Fu, Chairman and CEO of Innovation Works, gave a lecture on 12 November to the faculty and students of City University of Hong Kong (CityU). The talk was entitled “The Chinese Internet: A Reflection of China”, revealing the myriad social phenomena in China as it undergoes dramatic economic development. 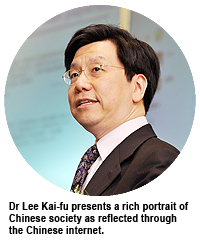 The theme of Dr Lee’s talk was inspired by Mr Vint Cerf, the father of the internet. “The internet is like a mirror, reflecting our society. If we do not like what we see in that mirror, the problem is not to fix the mirror; we have to fix society,” Mr Cerf said.

In other words, the internet shouldn’t be judged as good or bad. “The merits or demerits of the internet are a reflection of the problems in society,” Dr Lee explained.

Born in Taiwan, Dr Lee conducted research in the US after getting his PhD there and later worked as a high-ranking executive officer and chief technical supervisor at leading global computer and internet companies. He has been working in mainland China for the last few years. He started Innovation Works in 2009.

Dr Lee’s lecture drew on his rich work experience in the US and China and his in-depth observation and comparative study of science and technology, society and youth in both countries. 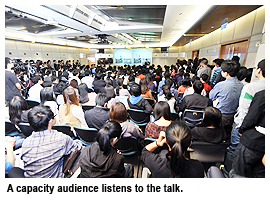 He noted, for example, that differences in the usage of the internet in China and the US may appear to result from social factors, but in fact they might be a manifestation of age difference. Netizens on the mainland are on average 25 but in the US they are 42 years of age.

Another difference lies in the purpose for using the internet. American netizens generally use the internet to search for information; Chinese netizens regard the internet as a means to seek social information and hear the voice of the general populace.

Some Chinese netizens even use the internet to voice “patriotic” opinions and assail society with “Angry Young Men” criticisms. These diverse purposes reflect the reliability and accessibility of the US mass media. On the contrary, the credibility of the mass media on the mainland leaves much to be desired; in particular the lack of appropriate channels to air views freely.

In addition, Chinese netizens are “clever” at illegally downloading audiovisual products from the internet. Chinese internet companies even boast about their special ways of management and competition. Some even treat plagiarism and imitation with high-sounding excuses such as “Chinese characteristics”.

These social phenomena are a reflection of the drastic development of the economy on the mainland, Dr Lee said.

He also highlighted unique phenomenon of the internet in China. For instance, it creates “extremely popular” writers, idols and brands, a phenomenon rarely seen in the US, and it created the labels “post 80s” and “post 90s” to describe younger generations and the concept of “human flesh search,” namely ID or cyber manhunt by exploiting media such as blogs and forums.

The competition between Chinese internet companies is focused on mutual plagiarising; hence the so-called shanzhai imitated products. Dr Lee offered his own opinion regarding this phenomenon, saying the term shanzhai is not totally negative because every product of that type contains some degree of “micro-innovation”.

Similarly, the Taobao auction website has been criticised for imitating eBay, Dr Lee said. However, its founder Mr Ma Yun created his own innovations such as providing sellers with the service of “free listing” and promoting pioneering ways of addressing concerns among Chinese internet users about “paying before delivery” so that the buyers and sellers both feel comfortable with online payment.

Before concluding his lecture, Dr Lee pointed out that Chinese youths are the hope of China’s future. “Chinese people as a whole are the most diligent and hard-working people in the world, aspiring for success,” he said, in spite of negative images of some of the “post 80s” and “post 90s”. 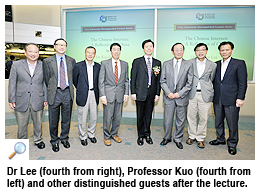 Dr Lee’s vivid language and his rich, eye-catching PowerPoint presentations made for a thought-provoking hour-long speech. It was part of the CityU Distinguished Lectures Series. Many attendees, totaling 500, started queuing at 10am even though the lecture was not scheduled to begin until 11am. The Multi-media Conference Room was filled to capacity and an additional lecture hall was opened to broadcast Dr Lee’s lecture live to those outside.

The CityU Honorary Awards Ceremony 2010 on 11 November conferred honorary doctorates on five prominent figures for their distinguished contributions to education and the well-being of society. Dr Lee Kai-Fu was one of the recipients.