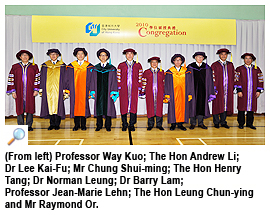 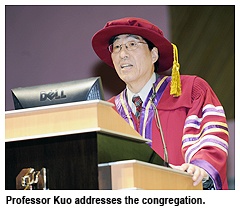 Mr Chung, Honorary Doctor of Social Science, was appointed as one of the three Chinese representatives to the Sino-British Land Commission when it was set up in 1985. He later became Chief Executive Officer of the Hong Kong Special Administrative Region (HKSAR) Government Land Fund Trust. Under his capable stewardship, it achieved very healthy returns, contributing significantly to the HKSAR Government’s ability to ride out the 1997–98 Asian financial crisis. Mr Chung has made significant contributions to public services, too. He has served as a member of the Executive Council and as Chairman of the Hong Kong Housing Society. In addition, he served CityU for 10 years, first as a Council member, then as Treasurer, Deputy Chairman, and, finally, Chairman. From 2006 to 2007, he chaired a search committee that secured the appointment of a worthy successor to the outgoing President of the University.

The success of Dr Lam, Honorary Doctor of Business Administration, may be explained by the Turtle Philosophy he developed: “With humility, you will get the truth; with application, you will get perfection; joy will come forth when you realise your beautiful dreams.” Dr Lam has also lived up to the Confucian principle of “sharing one’s success with society”. He established as early as 1999 the Quanta Cultural and Educational Foundation for the promotion of culture, art and education in Taiwan. He is also a strong advocate of life-long education, and is determined to develop the computer into a more efficient teaching aid.

Dr Lee, Honorary Doctor of Business Administration, is not only a renowned expert in computer science but also a supporter of youth development in China. To help young people start their own IT businesses and bring about a new generation of high-tech companies, Dr Lee set up Innovative Works in Beijing in September 2009. It is a new business model to help develop marketable and commercially viable products. Dr Lee’s influence on young people and students is well known in China. He advises them to “do your personal best,” understand their own personalities and set their own goals. Instead of seeking to beat others, he exhorts young people to pursue self-improvement.

Professor Lehn, Honorary Doctor of Science, developed the new field of supramolecular chemistry, which won him the Nobel Prize in Chemistry in 1987. Professor Lehn has devoted his research to supramolecular chemistry, which began with a study of the basis of molecular recognition. His work blossomed into a broader study of how molecular information in the programming of chemical systems contributes to self-organisation processes and how chemical objects and systems respond to external factors by modification and reorganising. He has made great contributions to mankind through his creative applications of supramolecular chemistry in disciplines such as medicine, materials science and nanotechnology.

The Honourable Andrew Li Kwok-nang, Honorary Doctor of Laws, was the first Chief Justice of the HKSAR. He has played a pivotal role in ensuring that judicial independence as guaranteed by the Basic Law is firmly established in Hong Kong. Under his strong leadership, the Court of Final Appeal won the trust not only of the people of Hong Kong but also of judiciaries in other jurisdictions. During his tenure, Mr Li upheld the rule of law and the independence of the judiciary under the principle of “one country, two systems”, at the same time guarding the essential values of the territory, for which he is widely respected. Mr Li has been a steadfast friend of CityU, and is a particularly strong supporter of the University’s School of Law. The Chinese and Comparative Law programme, a unique feature of the School, has greatly benefited from his advice. 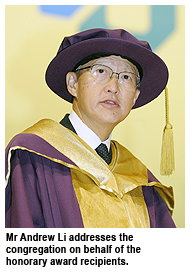 In his note of thanks, Mr Li said, “CityU has grown impressively in size and stature and is now ranked among the best 150 universities in the world. The University must be congratulated for what it has achieved. I am confident that it will go from strength to strength and I wish it every success in its endeavours.” He also said graduates should prepare for the uncertainty of the future by committing themselves to life-long learning, creativity and innovation, and achieving the inner strength to overcome adversity. “We must be prepared to do our fair share to serve the welfare of the community and help the underprivileged,” he added.

Moe Inaki, Bachelor of Arts (Hons) in Creative Media, represented the graduates. In her speech, she said she experienced a wide spectrum of cultures at CityU, adding that the professors here encouraged the students to discover new interests, inspirations and goals. 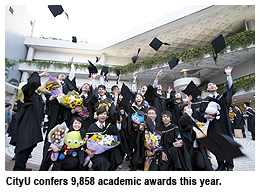