Consumer confidence dropped for three consecutive quarters in Hong Kong this year, according to the results of a survey announced today in Beijing on 20 October by City University of Hong Kong (CityU) and five other universities in the region.

The survey also indicated that consumer confidence in mainland China, Macau and Taiwan improved in the third quarter while confidence in stock investment and employment remained relatively strong. 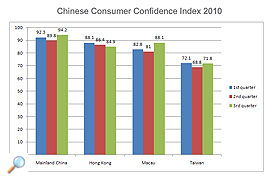 The index details consumer sentiment towards economic development, employment, consumer prices, living standards, housing purchases and stock investment. It serves as an indicator of spending intentions over a particular period by examining consumer perceptions about current and anticipated social and economic conditions.

The overall Hong Kong Consumer Confidence Index has been below 100 throughout 2010, reflecting Hong Kong consumers’ general lack of confidence. Among the six categories, Hong Kong consumers were confident about economic development (101.1), employment (98.6) and stock investment (93.8). But confidence in living standards (105.5), consumer prices (57.3) and housing purchases (53.4) was low. Confidence in consumer prices and housing purchases dropped over 10% compared to the previous quarter, the biggest drop in these two categories since the survey was started in 2009.

“The results indicate that although people in Hong Kong are optimistic about economic development, the ever-rising consumer and property prices decrease consumer confidence. The overall consumer confidence index declined as a result,” said Dr Geoffrey Tso Kwok-fai, Associate Professor in CityU’s Department of Management Sciences, which is responsible for conducting the research for the Hong Kong component of the index.

However, although overall consumer confidence in Hong Kong has dropped, according to the index, people in Hong Kong and the other three regions were optimistic about stock investment. Stock investment confidence reached new heights in Macau (98.8) and Hong Kong (93.8), and even though the mainland scored only 82.1 in this category, the score represented a 19% increase on the previous quarter. This increase was the highest among all four regions for this category.

Confidence in employment in the regions increased, too. The highest score in this category was in Macau (108.9), an increase of 16.6% on the previous quarter.

The Chinese Consumer Confidence Index has measured consumer outlook in mainland China, Macau, Hong Kong and Taiwan quarterly since the first quarter of 2009. The information collected to calculate the Hong Kong scores is based on interviews with more than 1,000 Hong Kong residents aged 18 or above. The 2010 third quarter survey was conducted from 15 to 21 September.