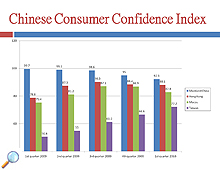 The overall Hong Kong Consumer Confidence Index has been below 100 since the first quarter of 2009, reflecting consumers’ general lack of confidence. Hong Kong consumers were most confident about their living standards (108.4) and were most apprehensive about the housing scenario (58.1). Confidence in the employment market rose for the fourth consecutive quarters, rising to a record high of 99.1 in January-March 2010. Confidence in consumer goods prices and housing purchases, however, dropped to record lows of 66.8 and 58.1, respectively. This pattern was also observed in the previous quarter.

The drop in the overall consumer confidence in mainland China, Hong Kong and Macau was mainly due to the record low sentiment about prospects in the housing market. Macau recorded the steepest decline of 15.3%, to 37.6, while sentiment in Hong Kong and mainland China was down 12.4% (to 58.1) and 7.8% (to 62.9), respectively.

In Taiwan, consumer confidence in all six categories improved, with consumer goods prices registering the biggest improvement of 24.5%; the index number rose to 47.7. However, the sentiment was still the lowest among all the four locations.

The Chinese Consumer Confidence Index has measured quarterly consumer sentiment in mainland China, Macau, Hong Kong and Taiwan since the first quarter of 2009. The survey is conducted under an ongoing collaboration between six universities in the four locations, with CityU being responsible for research in Hong Kong. The 2010 (first quarter) survey in Hong Kong was carried out on 14-20 March; 1,001 interviews were conducted with local residents aged 18 or above.