A top-level delegation from the University Grants Committee (UGC) met with senior academics of City University of Hong Kong (CityU) on 13 October.

The aim of the meeting was to share policies and practice of the UGC on different facets of its work and to listen to views on issues of mutual interest and concern. 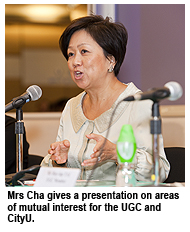 “We are all on the same side, contributing our concerted efforts to strive for excellence,” said the Hon Mrs Laura M Cha, UGC Chair.

Mrs Cha, who was accompanied by Mrs Stella Lau Kun Lai-kuen, UGC member, Mr Tai Hay Lap, UGC member, and Mr Michael Stone, Secretary-General, UGC, began by offering the assembled deans and heads of department a broad overview of the role of the UGC in Hong Kong’s higher education sector and highlighted key issues close to the heart of both the UGC and CityU.

Mrs Cha stressed that institutional autonomy in Hong Kong was important to the UGC but that checks and balances needed to be in place.

“We are called to be accountable on how we use public funds,” she pointed out, adding that Hong Kong universities enjoyed a great deal of autonomy, from staff hires to student selection and the internal allocation of funds. 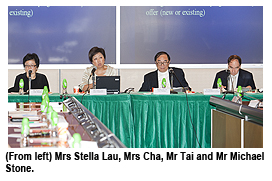 Looking at the education sector as a whole, Mrs Cha said the implementation of the new 4-year degree structure was a major challenge, in particular 2012, the “double cohort” year. She said the UGC will be asking the universities to provide contingency plans to cover logistical problems that might arise during this period of transition.

A key area outlined in Mrs Cha’s presentation looked at the 2012–2015 Academic Development Proposal (ADP). She said the UGC would be looking for greater emphasis on strategic issues and performance, the latter being supported by qualitative and quantitative data, in the next ADP. In addition, the focus should be on the quality of taught programmes and adherence to the universities’ agreed role.

Another key area of the presentation was competitive allocation of a percentage of student places. The UGC stressed that a greater element of competition was essential to driving the sector forward and would encourage institutions to think through the strategic reasons for the programmes—be they new or existing—that they wish to offer, Mrs Cha said.

One of the UGC’s concerns, the chairman said, was the self-financing activities of some of the universities in Hong Kong. She said that following the recent “proliferation” of self-financing programmes, the UGC had received complaints from students and university staff from some institutions concerning the possible danger that some of these activities were impinging on UGC-funded programmes. 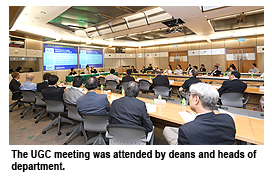 While the UGC did not want to intrude on the autonomy of the universities’ self-financing activities, Mrs Cha said, “we want to know how self-financing works.” She said the UGC wishes to gather information and offer guidance on best practice.

Mrs Cha ended her talk with reference to moves to reduce the fluctuations of government funding for research with the introduction of the Research Endowment Fund and a brief summary of the Higher Education Review 2010, which Mrs Cha said was one of the UGC’s most important undertakings in recent years.

This was Mrs Cha’s third visit to CityU since she took up her position in 2007. That year she offered staff and students a “Getting to Know UGC” session. In 2009 she met with members of the University’s Senate/Academic Board to listen to views of the UGC and thoughts on the Higher Education Review 2010.