About 120 students and staff of City University of Hong Kong (CityU) had a face-to-face encounter with the Hon Mrs Laura Cha, Chairman of the University Grants Committee (UGC), and some of its members. Titled "Getting to Know the UGC", the session was organised by UGC and held on the CityU campus on 1 November.

A new initiative under the leadership of Mrs Cha, the session aimed at fostering a better understanding between the UGC and its funded institutions. It provided an opportunity for students and staff to learn more about UGC's work and to exchange views directly with its Chairman and members on relevant issues. 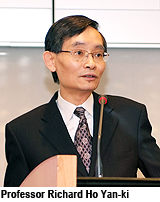 Professor Richard Ho Yan-ki, Acting President of CityU, extended a warm welcome to the visiting members, saying that within the short span of five months, UGC had visited the University twice.

Professor Ho applauded Mrs Cha for the innovative initiative to engage the University community. "Nine years from now, students sitting in this room will become potential employers of the four-year programme students and teaching staff will be teaching the four-year programme for CityU or elsewhere in Hong Kong. Therefore, engaging them to cultivate a closer relationship with UGC is very important," he said.

He also thanked UGC for its support of the University, including helping CityU work through the four-year curriculum reform process. 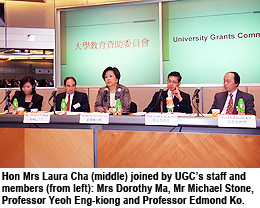 Mrs Cha said the UGC hoped to proactively explain to the community (in particular students and staff in institutions) its work, and at the same time listen to their concerns, which will be taken into account in the deliberations of the UGC.

During the session, Mrs Cha introduced the structure, main functions, operation and formulation of funding recommendations of the UGC. She also outlined some major developments of the UGC, first and foremost of which was the four-year curriculum reform programme.

"The four-year curriculum reform is the single most important project for the Hong Kong education sector, and we want to ensure that there is a smooth transition, and that by 2012, both the students and universities are ready," Mrs Cha said. 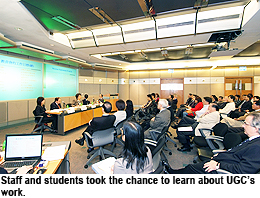 Internationalisation is another area the UGC was actively pursuing. Mrs Cha said the UGC hoped to attract more non-local students to Hong Kong, in addition to those from the Mainland.

"No one disputes the importance of internationalisation to our students and to Hong Kong," Mrs Cha said. She added that the UGC was fully aware of problems relating to the limited availability of hostel accommodation brought about by the increasing number of non-local students - an issue of concern to CityU students and staff. "We are doing everything we can to help institutions obtain more land for hostels, as well as exploring other alternatives," she noted.

During the one-hour session, members of the UGC also addressed a number of issues raised by those in attendance, including institutional collaboration,outcome-based approach in student learning and support for teaching activities.