Surface science at frontier of science and technology

Professor Gabor A Somorjai had a thought-provoking piece of advice for the packed audience attending his lecture on surface science at City University of Hong Kong (CityU) on 14 September.

“Don’t forget to dream,” he said, saying academic life should mean more than vying for research grants to solve the next problem. “You need a dream that will carry you through a life time of very exciting work.” 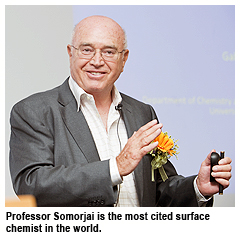 Now regarded as the “father” of modern surface chemistry, Professor Somorjai had a dream when he first started life as a young scientist in the US: to better understand catalysis, an important field within surface chemistry. His aspirations, curiosity and research brilliance led him to become the most cited surface chemist in the world, with a remarkable 35,000 citations to his name.

The talk given by Professor Somorjai, a professor of chemistry at the University of California, Berkeley, was part of the City University Distinguished Lecture Series. The title of his lecture was “Surfaces—Favorite Media of Evolution and Modern Technologies”.

He began by complimenting CityU on its facilities for scientific research, saying how they compared very favorably with comparable facilities in institutions of higher education in other parts of the world. He then offered an informative overview of the importance of surface science to the world today.

His main message was that research at the forefront of surface science leads to applications that produce wealth and improve health.

A surface, Professor Somorjai said, whether it is an interface in a vacuum, in air, in liquids or in contact between solids, and so forth, has two possible functions. It protects against corrosive chemistry, and performs selective chemistry as a catalyst for change. 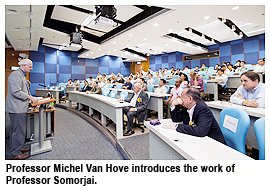 “Surface science and its applications are at the frontiers of science and technologies,” he said, with reference to developments in green chemistry, biomedical engineering, energy, and a detailed look at the development of the catalytic convertor, credited with helping to reduce air pollution in the world’s cities.

He paid particular attention to how biomedical appliances used for prolonging life such as implants need to have their surfaces treated to ensure against bacterial infections.

“Surfaces have unique chemical, mechanical, electrical, optical and magnetic properties, which find utility in modern technologies that enhance the quality of our life and increase life expectancy,” he said.

Professor Somorjai also offered an interesting definition of a human through the eyes of a surface scientist: “The human body is a polymer water interface system with absorbed proteins.” 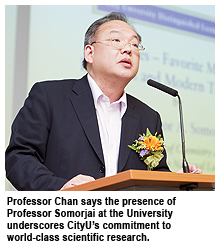 Professor Chan Chi-hou, Acting President, welcomed Professor Somorjai to CityU prior to the lecture, saying his work had led to a better understanding of catalysis. He listed a number of Professor Somorjai’s honours and awards, including the Wolf Foundation Prize in Chemistry in 1998, a National Medal of Science in 2002 and the Priestley Medal in 2008.

He added that Professor Somorjai’s presence at CityU highlighted the University’s commitment to pursuing excellence in research as a world-class university.

Professor Michel Van Hove, Head of the Department of Physics and Materials Science, chaired the event. He told the audience that Professor Somorjai had been an exciting colleague to work with when they were at Berkeley together, a professional collaboration that lasted 18 years.

“He’s a chemist but he loves to collaborate with people from other fields. He enjoys the fruitful mix that such partnerships produce.”