As part of the City University Distinguished Lecture Series, pioneering IBM scientist Dr Don Eigler provided an eye-opening insight into the continuing quest to develop increasingly smaller devices that are now operating on the atomic level. 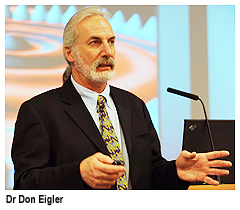 Delivering “The Small Frontier” lecture at City University of Hong Kong on 28 January, Dr Eigler outlined the scientific advancements in miniaturisation and his expectation that they will ultimately lead to era-defining breakthroughs in medicine, biology, communications and energy production.

A physicist and IBM Fellow at the IBM Almaden Research Centre, Dr Eigler in 1989 achieved a historic landmark by demonstrating the ability to manipulate individual atoms with atomic-scale precision. He went on to inscribe the letters I-B-M using 35 individual xenon atoms manipulated by a low temperature ultra high vacuum scanning tunnelling microscope that he designed and built.

“We today have the extraordinary good fortune to witness and experience a time of change so rapid and sweeping in scope that it will no doubt become ranked among the great revolutions in mankind’s history, alongside the agricultural, industrial and information revolutions,” said Dr Eigler. “The information revolution is having a transformative impact on nearly every h 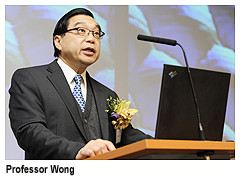 uman endeavour. When we take a close look at what has made this progress possible we find a common theme: the ability to build ever-smaller structures. How far can this era of miniaturisation take us and what will be the consequences? To form partial answers to this question we need to look at the ultimate limit of miniaturisation: building things atom-by-atom from the bottom up,” he explained.

Following an introduction by Professor Roderick Wong Sue-cheun, Vice-President (Development and External Relations), Dr Eigler drew upon the seemingly far-fetched technological devices portrayed in 1960s science fiction television series, Star Trek, to illustrate how the seemingly impossible was soon surpassed by reality. Communications tools used by the fictional Captain Kirk do not compare to modern mobile phones. Military applications such as invisibility-inducing cloaking material have been developed. Even the signature Star Trek special effect, human teleportation, is now in the realm of science fact with photon teleportation a modern reality.

Such developments in nano-technology have huge implications for many fields of endeavour. One of the most exciting prospects outlined by Dr Eigler is in medicine, particularly the area of nano-fibre enabled regenerative medicine. Tests on rats with severed spinal cords have already yielded amazing results. The regeneration of tissues achieved through a combination of living cells, which will provide biological functionality, and nano-scale materials acting as scaffolds to support cell proliferation, has led to the injured rats reversing their earlier paralysis.

Dr Eigler also predicted that as technology was driven by demand and societal needs, the pace of innovation would also be astonishingly quick in the areas of energy production ecology and communications.

"Physics, biology, medicine, chemistry and material sciences are all pushing towards the same small frontier,” he concluded.