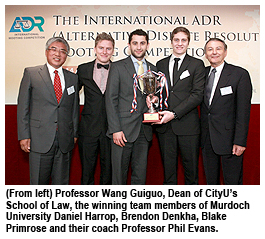 The Inaugural International Alternative Dispute Resolution Mooting Competition held at City University of Hong Kong (CityU) ended on 14 August. The moot team of Murdoch University from Australia emerged as the overall winner while the School of Law of CityU was the runner-up. Daniel Harrop of Murdoch University was given the Best Mediator Award in recognition of his skills in understanding the interests of the concerned parties and generating options for mutual gain during the mediation process. 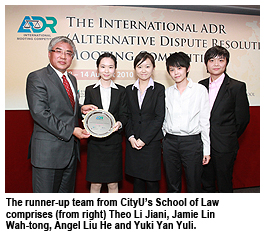 The Competition is the first of its kind created, developed and hosted in Hong Kong to be open to law students from overseas. The event is highly relevant to Hong Kong because, as a major hub for international trade and commerce, it is well positioned to become a leading centre for alternative dispute resolution. In addition, CityU is using the event to promote the professional skills of arbitration and mediation, which forms an important part of legal training today. 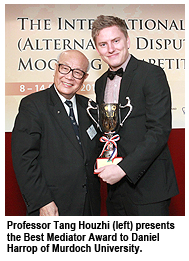 The oral hearings took place from 9 to 14 August at CityU with ten teams of three to five law students each from renowned law schools such as Harvard Law School and the School of Law at Tsinghua University as well as CityU School of Law.