The world’s first mooting competition to combine arbitration and mediation to resolve a simulated dispute in court case will be held at City University of Hong Kong (CityU) from 8 to 14 August.

The Inaugural International Alternative Dispute Resolution Mooting Competition has been organised by the School of Law at CityU in association with the China International Economic and Trade Arbitration Commission (CIETAC) and School of Law at Columbia University. The moot teams come from Australia, mainland China, India, South Korea and the US.

The competition is unique in that it is the first time that law students from overseas are competing in a mooting that has been created, developed and hosted in Hong Kong. It is highly relevant to Hong Kong because, as a major hub for international trade and commerce, it is well positioned to become a leading centre for alternative dispute resolution. By organising this international competition, CityU’s School of Law is offering law students the opportunity to enhance their research, analytical and advocacy abilities as well as the professional skills of arbitration and mediation. 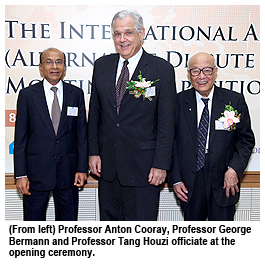 Ten teams from renowned law schools such as Harvard Law School and the School of Law at Tsinghua University will compete for various awards, including the Best Arbitrator/Mediator. Five law students from CityU’s School of Law have been trained for the competition. 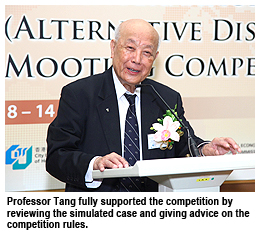 The scenario given to the students in the simulation involves an international commercial dispute between the manufacturer and distributor of a sun cream product. In the general rounds, two teams will present their arguments before an arbitral tribunal comprising of one student and two judges. The tribunal will suggest that the parties proceed to mediation. Knockout rounds follow, leading to the final round on 14 August.

For more information about the moot and updates, please browse http://www.cityu.edu.hk/slw/ADR_Moot/index.html